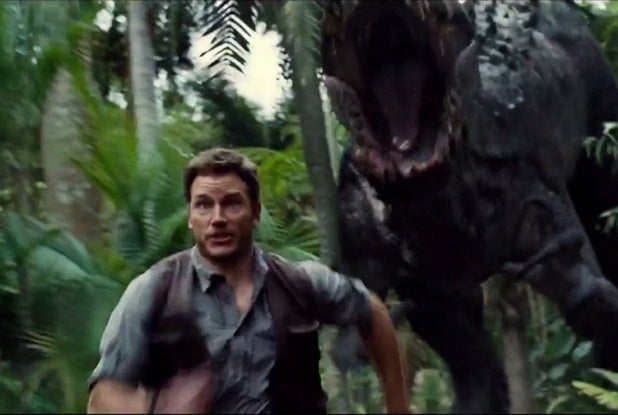 “Jurassic World” is breaking records and making money faster than any movie ever has, raising the question of whether it could potentially top “Avatar” as the highest-grossing film ever at the worldwide box office.

The next major mark likely to fall to the rampaging dinos is currently held by another Universal Pictures blockbuster, “Furious 7,” which topped $1 billion at the worldwide box office in a best-ever 17 days in April. “Jurassic World” brought in $524 million globally last weekend and could go over $1 billion as early as this weekend, and establish a new standard.

The sci-fi sequel directed by Colin Trevorrow and starring Chris Pratt and Bryce Dallas Howard hasn’t let up at the domestic box office. On the heels of its best-ever $208 million debut last weekend, it has taken in $25 million Monday, $24 million Tuesday and $19.8 million Wednesday and is up to $278 million domestically, Rentrak reported Thursday.

Also Read: 'Inside Out' Will Be First Pixar Movie Not to Debut at No. 1

“Jurassic World,” a sequel to Steven Spielberg‘s 1993 sci-fi classic “Jurassic Park,” is a heavy favorite to win the coming weekend race, despite the debut of “Inside Out,” the first Pixar film to be released by Disney in two years. If it can hold 50 percent of its opening weekend, the big lizards will come in at $104 million, just ahead of the record $103 million for a second weekend set by “The Avengers” in 2012.

“If it does that, then I believe we can start talking seriously about a run at the ‘Avatar’ record,” Exhibitor Relations senior analyst Jeff Bock said. James Cameron‘s 2009 3D sci-fi tale is No. 1 on the all-time list of top-grossing movies globally with $2.78 billion, followed by 1997’s “Titanic” ($2.18 billion) and “The Avengers”and “Furious 7,” both with $1.51 billion.

“Jurassic World” has been even stronger abroad, where it broke the records for biggest overseas and worldwide openings last weekend with $315 million and $524 million, respectively. The expanding foreign market, with significantly more theaters and a booming  box office in China, gives recent films an edge over “Avatar.” New international figures won’t be available until Satuday, but it’s possible to make a reasonable projection.

The foreign total for “Jurassic World” last weekend was roughly a third greater than its domestic haul. Projecting another $20 million on Thursday, “Jurassic World” will have taken in roughly $90 million domestically since the weekend. Adding $120 millon to that — the domestic number plus 33 percent — for an overseas number adds about $210 million to the worldwide total. That puts “Jurassic World” at around $725 million going into the weekend, putting $1 billion within range and possibly, the “Avatar” record within reach.

“Anything’s possible,” said Chris Aronson, the distribution president who oversaw the record “Avatar” run at Fox, which has three sequels planned beginning in 2017.  “But remember, that one took an entirely different approach in terms of the release, and I think that makes a big difference.”

James Cameron‘s sci-fi epic debuted to $77 million the weekend before Christmas, and followed that up with a $75.6 million second weekend that began a streak of 11 straight weekends in which it never fell more than 30 percent from the previous weekend. It stayed in the top 10 for 14 weeks, eventually hitting $750 million domestically. Its opening weekend represented just 10 percent of that. By comparison, “Furious 7” made nearly 42 percent of its $350 million domestic total in its first weekend, the norm for most recent blockbusters.

“The trajectory of any given movie depends upon the release date and the subsequent competition in the marketplace,” Rentrak media analyst Paul Dergarabedian said. “This is why the two top-grossing films of all-time have been December releases: ‘Avatar’ and ‘Titanic.’ Both films benefited from a marathoner’s strategy, slow and steady all the way to multi-billion-dollar global receipts with neither film setting the world on fire with their debut weekend grosses, but capitalizing on a pretty wide open playing field from mid-December and into the typically slower periods of January, February and March.”

Another film that could have a shot at overtaking “Avatar” would be “Stars Wars: The Force Awakens,” which Disney is opening on Dec. 18 and is given a shot at topping $2 billion globally.

Summer movies tend to have bigger opening weekends, but don’t have the staying power, Dergarabedian said.

“They blast out of the gate, make their mark quickly and then come up against formidable summer titles that make for a very competitive moneymaking environment,” he said. That means the ultimate answer to the question of whether the dinosaurs become No. 1 all-time is probably not, but it can’t be ruled out.  out.

“‘Jurassic World’ is breaking all the rules,” Dergarabedian said.