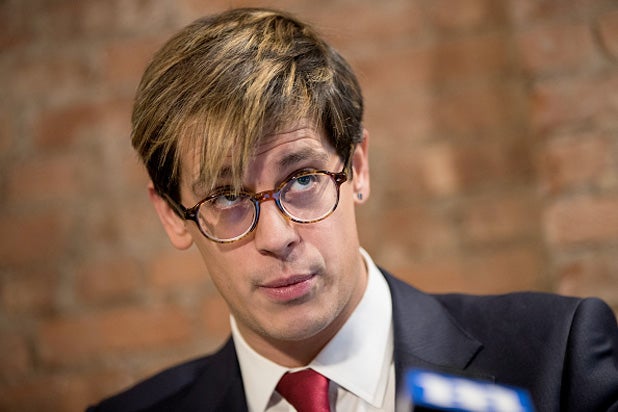 (Editor’s note: Despite his ardent support of President Trump, conservative firebrand Milo Yiannopoulos isn’t a U.S. citizen. In this guest column, immigration attorney Sarah Edgecomb lays out his options if he wants to stay in the U.S. after resigning from Breitbart News in light of his comments about pedophilia. His former boss at Breitbart, Steve Bannon, is Trump’s chief adviser.)

Milo Yiannopolous’ resignation from Breitbart News has prompted many to wonder whether his immigration status in the United States could be in jeopardy. Yiannopoulos may not have much time to act, but he likely has some options that would allow him to remain in the United States and continue his work.

At the same news conference where he announced Tuesday that he was leaving Breitbart, he said he resides in the U.S. on O-1 status. That’s an immigration status for individuals who possess extraordinary ability in the sciences, arts, education, business or athletics.

Yiannopolous has said that he holds O-1B status, which specifically applies to artists — who can include journalists. To qualify for that particular immigration status, the individual must be sponsored by an employer, or through an “agent.” The agent can be any U.S. business or individual.

When an individual is terminated or leaves the employer for any reason, he or she must generally have a new petition filed by a new employer, or be prepared to leave the country as soon as possible.

If a new petition is quickly filed with the U.S. Citizenship and Immigration Service (USCIS), the employee can begin work for the new employer as soon as the petition is approved. In some situations, he or she can file an amendment to the original petition in the event of a major change in the terms of employment.

But the law was changed in January to formally provide individuals with 60 days after leaving a job to have a new petition filed on their behalf, or leave the country. Should Yiannopoulos be worried? Not really.

But he may have more flexibility if he was sponsored by an agent on behalf of Breitbart and a mix of other employers. In this case, the law would clearly allow him to add new engagements to his itinerary without notifying the government of the changes. This provision allows flexibility for O-1B workers, such as musicians, who may pick up new gigs after arriving in the U.S.

This rule would potentially also allow Yiannopoulos to easily add new engagements to his schedule. And adding gigs seems to be what Yiannopoulos intends to do. In his press conference Tuesday, he announced a “new, independently-funded media venture of my own and a live tour in the coming weeks.”

It is possible that such a business could sponsor Yiannopolous for future work even if his current O-1 status has been terminated for some reason.

Though the immigration rules prohibit “self-sponsorship,” such a business could potentially serve as a proper sponsor for Yiannopoulos if he can establish that his co-founders, other major shareholders, or a board of directors supervise and control his employment. Alternatively, a U.S. agent could potentially serve as a sponsor on behalf of an enterprise controlled by Yiannopolous.

If that is the case, Breitbart would likely be required to notify the government that he no longer works there, but he could remain in the U.S. as permitted by his other O-1 petition, and he could continue working for his other employers listed in the separate O-1 petition. If the other petition was filed by an agent, he could even add those new gigs. This would be the most straightforward scenario for Yiannopoulos.

In short, it looks like Yiannoplous has a range of immigration options available to him. Although the time may be short, he will likely find a way to remain in the U.S. with the help of his immigration lawyers, if he chooses to do so.

View In Gallery
BIO Sarah Edgecomb
Sarah Edgecomb is an immigration attorney and the founding member of Edgecomb Law LLC, located in Cambridge, Massachusetts. She has represented artists, scientists, academics and entrepreneurs and is primarily focused on achievement based immigration including O-1 and EB-1. She has represented individuals from Australia, Bangladesh, Brazil, Canada, Germany, Honduras, India, Israel and the U.K., among many others.

Sarah Edgecomb is an immigration attorney and the founding member of Edgecomb Law LLC, located in Cambridge, Massachusetts. She has represented artists, scientists, academics and entrepreneurs and is primarily focused on achievement based immigration including O-1 and EB-1. She has represented individuals from Australia, Bangladesh, Brazil, Canada, Germany, Honduras, India, Israel and the U.K., among many others.