One hugely celebrated highlight of the Oct. 31 episode of “Succession” featured a classic by the rock band Nirvana. And Courtney Love, widow of Nirvana leader Kurt Cobain, said on Tuesday that it’s the best she’s ever felt about licensing Nirvana’s music.

This season has seen the Roy family forced to deal with a growing scandal involving multiple instances of sexual assault on the family-owned cruise line — which the company had covered up. So in the episode, the Family is holding a company town hall to address that. But while Shiv, recently promoted to a high ranking role, tries to speak, Kendall, who has firmly broken with his family, blasts Nirvana’s “Rape Me” over the loud speakers, drowning her out.

“I’ve never felt so good about approving a usage of a song of Kurt’s. You understood this: him, it’s beautiful. I’m sure he’s proud #nirvana#rapeme#kurtdonaldcobain#myfavoriteinsidesource Ask me who it’s about one day. I might even tell you,” Love tweeted Tuesday afternoon. 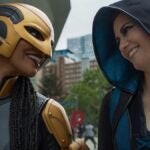 Also Read:
‘Supergirl': Azie Tesfai and Chyler Leigh ‘Laughed ‘Til We Cried’ While Making Out in Their Costumes

So if you were wondering how Courtney feels about it, now you know. Of course, we’re a bit shocked to learn that the song might have had a real life inspiration. We’ll see if she ever elaborates.

You can see her tweet below, which helpfully also includes video of the scene we described above.