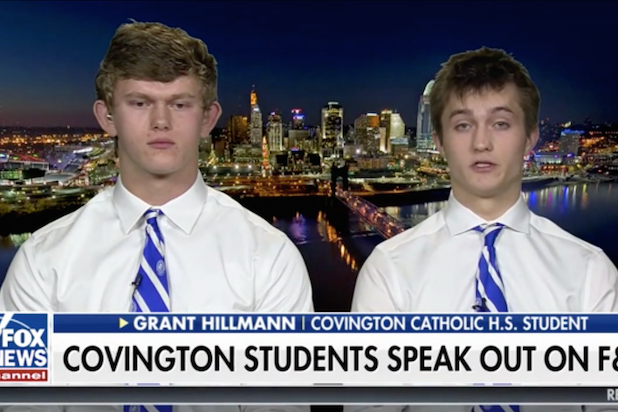 Students from Covington Catholic High School say they have been the victims of online hate mobs and have received graphic personal threats and wishes of violence.

“I’ve never heard such cruel things wished upon another human being,” student Grant Hillman said on “Fox & Friends” Wednesday. It “ranged from getting locked inside a building and getting burned alive to sexually assaulted by the clergy members. It’s just awful.”

Hillman also said that his personal information had been released online so far on three separate occasions. The act, colloquially known as doxxing, is broadly frowned upon and is a violation of Twitter’s terms of service.

Also Read: Covington Student Refuses to Apologize After Viral Video: 'I Was Not Disrespectful' (Video)

The students got a mostly sympathetic ear from co-host Steve Doocy, who stated on air his belief that longer video of the incident had broadly “exonerated” the students.

Wednesday proved to be a day of Covington students striking back against negative media portrayals of them and their school. On the “Today” show, Nicholas Sandmann, the student featured most prominently in the viral video, struck a defiant tone, refusing to apologize for any of his actions.

“As far as standing there, I had every right to do so. My position is that I was not disrespectful to Mr. Phillips. I respect him. I’d like to talk to him,” Sandmann told “Today” host Savannah Guthrie. “But I can’t say that I’m sorry for listening to him and standing there.”

Also Read: Trump Calls Covington Students 'Symbols of Fake News and How Evil it Can Be'

Passions ran high online over the weekend about the issue, with one GQ writer urging his followers to doxx the students while a Vulture writer stated publicly his wish that the Covington kids and their parents should die. The students were also denounced by the local diocese of Covington and threatened with expulsion as their school continues to investigate the issue.

Several students are known to be lawyering up.

Longer video of the moment, however, has gradually led to a reevaluation from many after an initial rush to judgement. In a widely shared article for Reason Magazine, Robby Soave said the media botched the story by reacting only to the initial out of context video.

“Far from engaging in racially motivated harassment, the group of mostly white, MAGA-hat-wearing male teenagers remained relatively calm and restrained despite being subjected to incessant racist, homophobic, and bigoted verbal abuse by members of the bizarre religious sect Black Hebrew Israelites, who were lurking nearby,” wrote Soave. “Phillips put himself between the teens and the black nationalists, chanting and drumming as he marched straight into the middle of the group of young people.”