“Ed is such a beloved character. But such a wild card in the energy of the Bebop,” Nemec told TheWrap. But at the end of the first season of Netflix’s live-action adaptation of the beloved anime, newcomer Eden Perkins shows up to give Spike Spiegel (John Cho) a new mission.

Nemec says it was always the plan to hold Ed back until the very end of the season (and also points out that he’s only following the original anime’s lead on that).

“Radical Ed doesn’t show up in the first episode of the anime. It is many, many, many episodes into the season that Radical Ed shows up,” he argues. “So I felt, in fairness, like I was playing fair with the spirit of the anime by holding the reveal of Radical Ed until much later.” 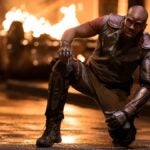 Also Read:
‘Cowboy Bebop': Mustafa Shakir on Bringing Jet Black to Life and Why the OG Anime Was So Popular

In the original anime, the hacker Radical Ed becomes a key member of the Bebop crew, which includes Spike, Jet Black (Mustafa Shakir), Faye Valentine (Daniella Pineda) and their robotically enhanced Corgi, Ein. Nemec explains that they wanted to keep the core focus of the first season on Spike, Jet and Faye, as the Netflix version delves much deeper into the backstories of the trio then the anime did.

“It didn’t feel to me like there was enough real estate to properly explore the character of Ed while still being in the early development stages of introducing these characters to the audience at large,” Nemec says. “There are a lot of people who love the anime who are going to come to this show with knowledge of the anime and the characters, but there was also a lot of ground to cover in terms of understanding who Spike and Jet were, what their conflicts were, what their histories were, layering in Faye, who’s a bit of a disrupter a few episodes later.”

Though she’s not seen, Ed is first hinted at in the sixth episode, when she gives Jet a lead on a bounty, which not only turns out to be false, but ends being a trap for Spike, who is being held captive by a rogue A.I system. Now that the Bebop crew is split up, Nemec says this will give them the proper time to dig into Ed.

“There were so many conversations in the early days about when do we introduce Ed. And it felt like within the momentum of that first season and the character stories that we wanted to tease out,” Nemec says. “Now that you know who this core team of Bebop is, here comes this wild card, and in a way that we have enough sort of dramatic real estate and screen time to be able to properly dig into the who what and why is radical Ed.”