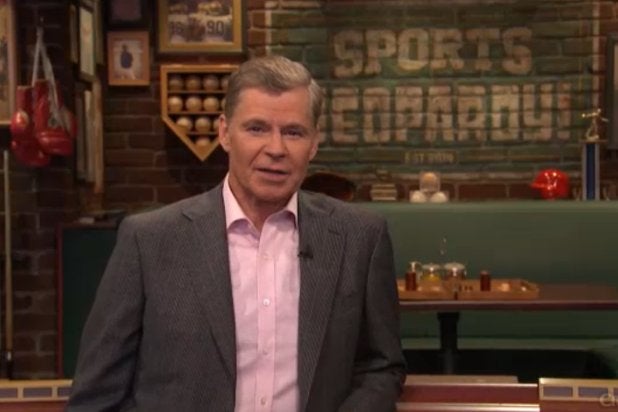 Alex Trebek made a guest appearance on the most recent episode of Crackle’s sports-themed spin-off of the classic “Jeopardy!” format. He was a week early to tout the one millionth full-episode stream of “Sports Jeopardy! with Dan Patrick,” which launched Sept. 24.

After three installments, the new series is fast approaching that landmark number and expected to cross it any day. Crackle cannot say that about any other show. But what it can boast is that for those three weeks of “Sports Jeopardy,” nearly half of all viewers who tuned in were new to the streaming service.

The 30-minute weekly game show follows the format of its parent show, with contestants having to come up with questions to sports-related answers.

“We set out to bring a unique and exciting live, weekly program to our network and it’s great to see that audiences are connecting with this show as much as we do,” said Crackle GM and Sony EVP of Digital Networks Eric Berger. “With Dan Patrick and Harry Friedman at the helm, a proven format and brand, and a companion mobile game app, we feel we have a winning formula.”

Patrick is an Emmy-winning sportscaster who co-hosts NBC’s “Football Night in America,” a senior writer for Sports Illustrated, and has his own radio program “The Dan Patrick Show.” He gained worldwide fame as an anchor for ESPN’s “SportsCenter” for 18 years. Friedman has been the executive producer of both “Jeopardy!” and “Wheel of Fortune” since 1999.

“We were so due for ‘Sports Jeopardy!’ and it shows,” said Dan Patrick. “Now those, like me, who spend their days endlessly watching sports to the detriment of their own health and normal social interaction have a home with our show on Crackle.”

Crackle is a streaming provider of original and licensed content — unlike Netflix and Amazon it is free and ad-supported — best known for “Comedians in Cars Getting Coffee.” The short-form “Comedians in Cars” reached 25 million streams after a three-season run — spanning nearly two years — which consisted of 23 episodes.