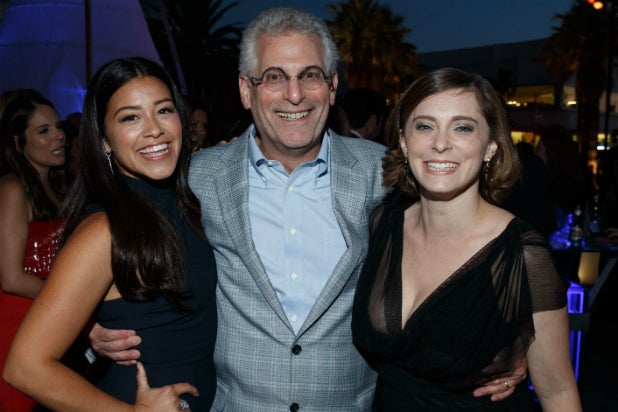 CW chief Mark Pedowitz is “disappointed” in the Television Academy for the amount of Emmy love it has (or hasn’t, really) given “Crazy Ex-Girlfriend” and “Jane the Virgin.”

“We know what’s going on,” Pedowitz told reporters Monday at the Television Critics Association press tour. “We know the affection and affinity that both those shows have.”

“I’m more disappointed in some way, shape or form that Aline [Brosh McKenna, the ‘Crazy Ex’ showrunner] and Rachel [Bloom] and Jennie [Snyder Urman, the ‘Jane’ creator] and Gina [Rodriguez] and their teams and their casts never got the accolades they deserved from the Academy,” Pedowitz said of the two female-centric series. “I’m disappointed that they didn’t recognize the great work they did, the great work our superhero shows did in terms of the action and special effects. And I’m more amazed by the fact that the Academy could not recognize ‘Crazy Ex’ for any original music, given the fact that they do original music week in and week out.”

“I’m disappointed for them and my whole team that we never got that recognition, and I hate to say it, we deserved it,” he added.

When asked for his theory as to why, Pedowitz said his corporate P.R. team wouldn’t let him share. Smart.

Neither show has pitched an O-fer though over their entire runs. “Crazy Ex” has been nominated for and even won a pair of Emmys before.

“Jane,” which stars Gina Rodriguez, was nominated for best narrator in both 2016 and 2015. Anthony Mendez didn’t win either year.