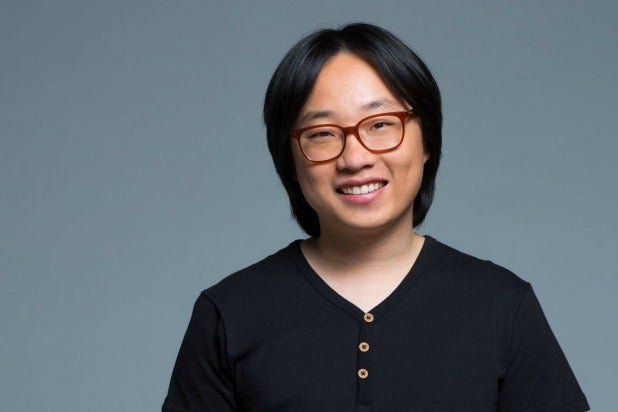 On the heels of the crazy success of “Crazy Rich Asians” comes “Silicon Valley” star Jimmy O. Yang’s hilarious but heartfelt memoir “How to American,” which tells his story as a young Chinese immigrant pursuing a career in Hollywood… much to his family’s chagrin.

You already know the answer to that question, but sharing that deep desire didn’t sit well with his traditional parents.

“My dad thought I was crazy, but I figured it was better to disappoint my parents for a few years than to disappoint myself for the rest of my life,” said Yang, who migrated to the U.S. from Hong Kong with his parents when he was 13. “I had to disappoint them in order to pursue what I loved. That was the only way to have my Chinese turnip cake and eat an American apple pie too.”

It didn’t go much better with his mother, who he said is a “people person” but is also “very blunt.”

“I always have to brace myself when I visit my parents,” Yang joked. “My mom often greets me with a slew of nonconstructive criticisms: ‘Jimmy, why is your face so fat? Your clothes look homeless and your long hair makes you look like a girl.’ After 30 years of this, my self-image is now a fat homeless lesbian.”

The decision to get his life experience on paper for the world to see clashed with a couple of what he calls his “Chinese Rules”: “1) Respect your parents, your elders and your teachers. NEVER talk back or challenge them under any circumstance, and 2) Family first, money second, pursue your dreams never.”

Also Read: 'Crazy Rich Asians' Nears $150 Million, and It's Not Just Because of Asian Moviegoers

But pulling up memories for the book was, “almost therapeutic” for him.

“Certain stories, like my mom leaving when I was 15-years-old to go back to China because she didn’t quite assimilate like we did, that was a moment that was very sad in my life,” Yang said. “But also, maybe now the emotions come from the fact that she is back in this country and we do have our family back together. And it’s all fine. I turned out to be OK, for the most part. I think. But it kind of reminds you that it doesn’t matter how tough times are, maybe when you look back at it, it’s just another anecdote.

“Hopefully people can draw some parallels to that maybe in their own experiences.”

Yang was shooting “Crazy Rich Asians” while completing “How to American,” and he remembers how the combined experiences felt.

“I just felt so proud to be Asian,” he said. “It doesn’t matter about ‘Asian-American’ because I saw other Asians — Asian-Australians, from U.K., from Singapore — we were all just there, doing the best that we could. Our whole journey of our life took us to that moment, right there in Singapore. I was so proud of everything.

“The book is about how I tried to fit in to be an American; that experience made me feel so proud to be Asian that I wanted to be more Asian again, instead of trying to change myself to assimilate into this culture that I ended up growing up with. A lot of people go on this journey of finding themselves and then eventually realize that their true self wasn’t on the outside but it’s always been there. It’s going back to what you know.

“And there’s some comfort in that. … now that the movie is a success, that story and that journey means that much more to me.”