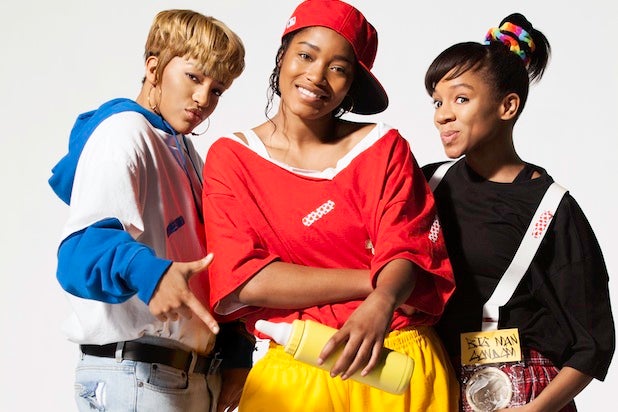 The end of hip-hop trio TLC as we knew it occurred when Lisa “Left Eye” Lopes died in a car accident in 2002. When VH1’s movie on the group airs Monday, it will tackle that event head-on.

“The movie goes there,” Keke Palmer, who played Rozonda “Chilli” Thomas in the movie, told TheWrap while promoting her DirecTV series, “Full Circle.”

“I think we handle it peacefully, she continued. “The way that it’s done is really just how it was done in real life, pretty much. I think they do a good job in the movie of depicting as much as they can in real time in two hours.”

VH1’s “CrazySexyCool” follows the rise of the three women during the early-90s, their challenges to stay on top and Lopes’s death. Thomas and Tionne “T-Boz” Watkins are consultants and executive producers for the film written by Kate Lanier (“What’s Love Got To Do With It,” “Set it Off,” “Beauty Shop”) and directed by Charles Stone III (“Drumline,” “Paid in Full,” “Mr. 3000”).

A huge fan of TLC before accepting the role, Palmer got to know her subject really well while shooting in Thomas’s hometown of Atlanta. The singer was often on-set during rehearsals and she and Palmer spent some time off-set, as well.

“I slept over at her house about three times while I was out there,” Palmer said. “She was just talking with me and being very open with me. We just really had a good time together. She was awesome.”

Palmer, who had her breakout moment with the title role in “Akeelah and the Bee” in 2006, says that the movie’s style is a lot like musical bio-pic “The Temptations” and certainly feels that it portrays the women’s relationship really well.

“They were meant to be a group together, because they all had whatever the other didn’t have to balance each other out,” she said. “There was so much authenticity to the group. So, when Left Eye passes, [the movie] lets you know that a piece of them both were taken away. And it was as if it would never be the same.”

Also read: VH1’s ‘I’m Married to a…’ Preview: Age Is Just a Number for Antoine and Towana (Exclusive Video)