When Bob Cochran and Joel Surnow developed their ambitious pitch for a real-time TV series set in the world of counter-terrorism, they could have had no idea that eight weeks before the first episode was set to air, the nation would be plunged into exactly the kind of horrific turmoil the show would be exploring for the next eight years.
But that’s what happened when “24” premiered on Nov. 6, 2001. 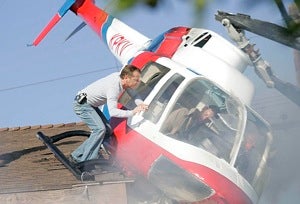 Somehow, viewers put aside their anger and confusion over world events long enough to embrace the show’s gritty escapism, making “24,” which wraps its eight-season run Monday night with a special, two-hour finale, a cultural phenomenon and a major hit for Fox.
Cochran, who left the series during Season 6, and executive producer Howard Gordon, who ran it since early in the first season, sat down with The Wrap to choose the 24 greatest moments in the “24” pantheon, presented here in chronological order.
So you’d better start reading; we’re on the clock –
Boop… beep… boop… beep… boop…
(Read also: ’24 Season 8 and Full-Series Disc Coming Dec. 7)
1. Voice-over
SEASON 1 | Episode 1 | Date: Nov. 6, 2001
The first episode begins with words on a screen and the low-key voice of Special Agent Jack Bauer (Kiefer Sutherland): “The following takes place between midnight and 1 a.m. on the day of the California presidential primary. Events occur in real time.”
Those last four simple words signified a historic experiment in TV storytelling. Never before or since has a series taken place without cutting ahead or flashing back in time.
2. Mile-high terror
SEASON 1 | Episode 1 | Date: Nov. 6, 2001
A man and woman flirt on an international flight. We’ve been told there will be an attempt on the President’s life, and this guy looks suspicious. But it’s the seemingly airhead woman who’s the terrorist, which we find out when she steals his press card during sex in the bathroom, jabs a flight attendant in the neck with a hypodermic needle, sets off a time-bomb and ditches via parachute just before the plane blows to bits.
The scene was chosen not for its gripping suspense and cool special effects, but because it establishes a pattern of misdirection frequently seen on the show. Nothing is ever as it seems.
3. Trust no one
SEASON 1 | Episode 6 | Date: Dec. 18, 2001
Jack’s daughter Kim and her friend Janet York have been kidnapped. Janet’s father Alan has been running all over town with Jack’s wife Teri looking for them. When he finally finds the girl and gets some time alone with her, he kills her. We later learn he wasn’t really her father, a misconception we’d been laboring under for five episodes.
Cochran: “This was one of those early scenes that established a pattern right from the beginning that this show’s not going where you think.”
4. Nina, the mole
SEASON 1 | Episode23 | Date: May 14, 2002
We’ve been puzzling all season long over the identity of a traitor within CTU, the fictional Counter Terrorism Unit where Jack Bauer works. When we see villain Andre Drazen talking with his inside source on the phone, we know the next face we see will be that of the mole. On the other end of the call, speaking to Drazen in Serbian, is Jack’s second in command and former lover, Nina Myers.
Gordon: “We always tried to think of what was the last thing the audience could possibly expect to happen, and then we’d try to make that happen. We’d have to go back and retrofit to set up clues to how the surprises were possible. But we’d always satisfy the requirements — or at least it seemed that way in our frantic moments of desperation.” 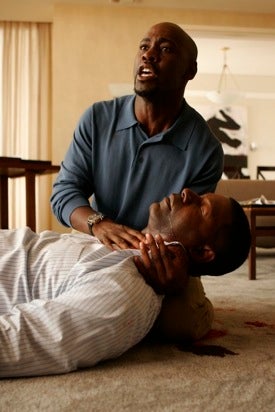 5. A Split in the White House
SEASON 1 | Episode 24 | Date: May21, 2002
First Lady Sherry Palmer (Penny Johnson Jerald) became one of the great characters in the show’s history, not only because her Shakespearean ambitions blinded her to everything else, but also because of the effect she had on her husband. When David catches her trying to destroy evidence in the scandal surrounding their son, the two have it out. Her behavior here ultimately leads to their divorce.
Gordon: “When they fight, we we can see her point of view — that he’d have gotten nowhere without her and has been sort of off-loading the dirty work onto his wife. The façade between them falls away, and the vulnerability and anger was really chilling. It was an interesting moment of revelation on both parts.”
6. Death hits home
SEASON 1 | Episode24 | Date: May21, 2002
In one of the show’s signature moments, Nina kills the person who discovers she is the mole: Jack’s wife Teri Bauer. This scene was picked for two reasons: 1) it signified that any character, no matter how beloved or vital to the story, is fair game, and 2) it set Jack on a downward emotional spiral that lasted well into the next season.
7. How far will Jack go? Nope, farther than that
SEASON 2 | Episode 25 | Date: Oct. 29, 2002
The season opens with the still-grief-stricken Jack being summoned back to CTU to stop a terror group from detonating a nuclear bomb in Los Angeles. Deciding to infiltrate the group, he orders one of its sleazeball rivals brought in, and he murders him right in front of the shocked head of CTU. He then moves forward with a plan to deliver the corpse’s head to the suspected nuclear terror group.
This scene was chosen as an early example of Jack going to extremes, then immediately topping himself, which he does by eyeing the dead sleazeball’s neck and announcing, “I’m gonna need a hacksaw.” The line quickly becomes part of the Jack Bauer lexicon.
8. Misdirection
SEASON 2 | Episode 35 | Date: Feb. 4, 2003
Kate Warner, with whom Jack develops a romantic relationship, is concerned that her sister Marie’s fiancé Reza is a terrorist. In fact, it’s Marie who is the terrorist, which we find out when she suddenly kills Reza. Her last words to him before the fatal shots: “I’m sorry, you really are sweet.” The producers liked this one as another example of the series’ legendary misdirection.
9. Kaboom
SEASON 2 | Episode 39 | Date: Mar. 4, 2003
In our years of TV viewing, we’ve seen many heroes disarm many bombs, preventing many massive explosions in the nick of time. So that’s what audiences are expecting when, in the season’s 15th hour, the clock ticks down on an impending nuclear disaster.
Wrong. 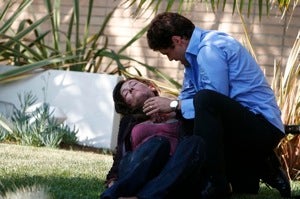