“Creed” approaches a 40-year-old franchise that’s gone the distance — Sylvester Stallone‘s saga of Philadelphia boxer Rocky Balboa — from an admirably different perspective: that of Rocky’s late rival/friend Apollo Creed’s son Adonis (Michael B. Jordan), who has his own boxing dreams and knows just the mumbling Philly warhorse to help him achieve them.

But that one-two punch of expectations — energizing a franchise and burnishing the acclaim heaped upon “Fruitvale” — seems to have gotten the best of Coogler, so that “Creed” emerges as a reverent entry but never a truly refreshed one.

The opening suggests thematic promise, showing us a 13-year-old Adonis Creed, a foster-home hopper in juvenile detention, walloping a fellow inmate. Coogler and co-screenwriter Aaron Covington’s sharp character notion is that Adonis, an illegitimate child who entered the world after Apollo’s death, has a hole to fill from never knowing his famous dad. Apollo’s widow, Mary Anne (Phylicia Rashad), adopts him, and he grows up in luxury, but as a young man on a career track in finance (when Jordan takes over), he’d rather secretly box in Tijuana, where he racks up a 15-0 record, and study his dad’s fights on YouTube.

Spurned by L.A. trainers who scoff at his self-taught status, Adonis decamps to the City of Brotherly Love and tracks down the Italian Stallion, still running the restaurant he named after deceased wife Adrian and wary about playing Mickey (Burgess Meredith’s father-figure trainer in the original “Rocky”) to another kid with something to prove. That reticence doesn’t last long once Rocky is convinced he sees Apollo’s talent in Adonis, and the training and motivational platitudes kick in. (“That’s your toughest opponent,” Rocky says to Adonis’ reflection in the mirror.) 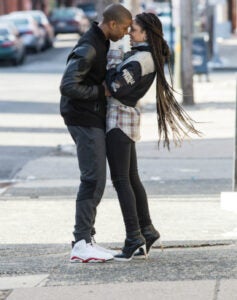 The biggest irony about “Creed” is that what’s missing inside Adonis is a nagging question mark for the movie, too. Carl Weathers’ Apollo Creed was a galvanizing force in the first four “Rocky” movies, but without him here, save the odd snippet of boxing footage, “Creed” creates a strange distance between the brassy, entertaining cockiness of Weathers’ performance, as fondly remembered by moviegoers, and the necessity of his absence being a driving force for Adonis. Though Jordan hits plenty of solid chip-on-his-shoulder notes in his portrayal of someone wondering whether his name is a blessing or a curse, the movie is like a ghost story without a ghost. (Although you do learn who won that private Rocky-Apollo bout that closes “Rocky III.”)

None of this would have mattered had Adonis been written with a personality equal to Apollo’s or Rocky’s, but Coogler and Jordan fall short of making the youngster as compelling a figure. The mechanical parts of the story don’t serve Jordan’s natural charisma the way “Fruitvale” jazzed everyday moments. By now, Stallone wears Rocky like a favorite tracksuit, and he’s a believably older version of his good-hearted underdog. But his scenes with Jordan, rather than being organically warm, feel dictated by formula.

The screenplay’s fighting-in-life metaphors aren’t memorably explored either. Adonis’ love interest — tough, talented singer girlfriend Bianca (an underused Tessa Thompson, “Dear White People”) — makes one mention of a hearing-loss condition on their first date before being sidelined as inspirational movie support staff. Later, “Creed” uncorks a third-act health scare for Rocky that feels conveniently shoved in to give both mentor and mentee equal dramatic footing on the uphill-battle front.

“Creed” doesn’t forget to pay homage to “Rocky” touchstones, either: the iconic steps outside the Philadelphia Museum of Art get a sweet, poignant nod at the end, and Bill Conti’s soaring fanfare makes an appearance. But an attempt at giving Adonis his own training montage crescendo, surrounded during a street run by bikers doing wheelies, doesn’t quite work.

Few longstanding franchises have been so personally tended to as the “Rocky” movies, with Stallone variously lauded and vilified for scattershot handling of his own beloved American loser-turned-hero. If 2006’s correctively quieter, old-school charming “Rocky Balboa” felt like a fitting close to an invariably overextended series, you can see why this entry — the first one not written by Stallone — suggested a reason to continue. But instead of playing like the first of a series of Adonis Creed movies, “Creed” never rises above being one more by-the-numbers “Rocky” retread.