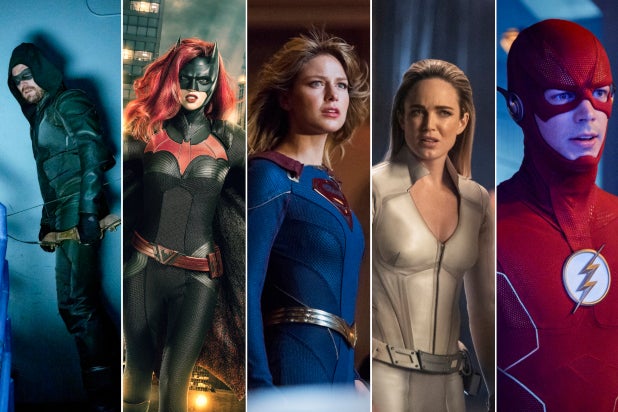 The CW is about to tackle its biggest challenge yet when it adapts DC Comics’ “Crisis on Infinite Earths” storyline this December.

The five-part event will include all six of the network’s “Arrowverse” shows (yes, even you “Black Lightning”), all spread out over two months.

And The CW is going big… and we mean big, with multiple Supermen and Lois Lanes — including a “Smallville” reunion — and cameos from just about anybody who has ever played a DC Comics character on the small screen. To help you make sense of everything, TheWrap has rounded up every bit of information we know about the five-part TV event.

1. It will be The CW’s largest — and longest — of its crossovers.

“Crisis on Infinite Earths” will encompass five different shows, including newcomer “Batwoman” and take up a whopping five hours and span two months. The first three hours, which will be set during episodes of “Batwoman,” “Supergirl” and “The Flash,” will air in December, the same time as the network’s prior crossovers.

Then after what we presume will be a major cliffhanger, “Crisis” will conclude with “Arrow” and “Legends of Tomorrow” airing back-to-back in January. The CW’s previous longest crossover was in Dec. 2017 with “Crisis on Earth-X” taking up four hours. “Crisis on Infinite Earths” will also serve as “Legends of Tomorrow’s” fifth season premiere.

While it won’t get its own special episode, the “Black Lightning” crew will make their first appearance as part of the larger “Arrowverse,” which through its first two seasons has been kept separate. “Black Lightning” showrunner Sam Akil has previously explained that his show exists in a separate universe from The Flash, Arrow and Batwoman (much like Supergirl does, but that’s more for business reasons — the first season aired on CBS).

It’s not clear which episode the characters will show up in, or who exactly will be among them, besides Cress Williams’ title hero. With the Pierce clan now a fully super-powered family, with his two daughters taking on their own superheroic identities as Thunder and Lightning, it wouldn’t be surprising if they came along for the ride.

3. “Arrow’s” final season will essentially be one long build up to “Crisis.”

The eighth and final season of “Arrow” will not only close out the flagship “Arrowverse” series, but it will also do the heavy lifting of setting up the upcoming crossover, with Oliver Queen hanging out with The Monitor, the mysterious being at the center of the big event. “Everything relates to what’s going to happen in our crossover episode, which we’ve never done before,” “Arrow” showrunner Beth Schwartz told Entertainment Weekly over the summer.

In its abbreviated final run, Oliver and The Monitor will travel the globe in an attempt to stop a cataclysmic event from destroying the multiverse, which will reach its crescendo during the big crossover.

4. But, “Arrow’s” crossover episode will not be its series finale.

While it’s widely assumed that Oliver Queen will not make it out of the crossover alive (his death was teased in the season 7 finale), “Arrow’s” crossover episode is scheduled to be the eighth of its 10-episode final run. That leaves two more episodes left to wrap up the “Arrow” story, one of which could potentially be the backdoor pilot for the potential spinoff following Queen’s daughter and The Canaries.

Tom Welling will get to show more than just the famous chest insignia, as he and Erica Durance will return as Clark Kent and Lois Lane from “Smallville.”

That series, which featured a pre-Superman version of Kent growing up in Kansas, aired for 10 seasons from 2001-2011. It first aired on The WB before it merged with UPN to create The CW. The crossover will pick up the “Smallville” duo some 10 years after the show went off the air.

Hey, it’s called “Crisis on Infinite Earths” for a reason. So why not pay a visit to one that existed on The WB? (Just don’t expect to see Michael Rosenbaum’s Lex Luthor join the party).

The actor who portrayed the Man of Steel in Bryan Singer’s much-maligned 2006 film “Superman Returns,” will don the red cape and blue spandex again, though he won’t be the same Clark Kent he played in that film. Instead, Routh will appear as an older, grizzled version of Superman based on DC’s “Kingdom Come” miniseries from 1996.

Routh already plays an “Arrowverse” character in Ray Palmer/The Atom from “Legends of Tomorrow,” so he’ll be pulling double duty.

7. You’ll be seeing double (or triple in some cases).

For those keeping score: “Crisis on Infinite Earths” will have three different versions of Superman and two separate Lois Lanes. That’s because both Tyler Hoechlin and Elizabeth Tulloch will be reprising their respective roles, which they’ve mostly played on “Supergirl.”

Both last appeared in the “Arrowverse” during last year’s “Elseworlds” crossover, and this time they’ll have a Super Baby joining them.

Bruce Wayne himself will finally enter the “Arrowverse.” Notice we didn’t say Batman, who still remains off-limits when it comes to TV (Warner Bros. is set to reboot the character, again, when Robert Pattinson takes over the cape and cowl in Matt Reeves’ “The Batman” in 2021). Kevin Conroy, who is well known for providing the voice for the Caped Crusader in “Batman: The Animated Series” and related animated shows like “Batman Beyond,” will appear as a version of Bruce Wayne from the future.

If that’s not enough, Burt Ward, who memorably played Robin to Adam West’s Batman in the 1960s, will appear in an undisclosed role.

The CW is really paying homage to its WB roots with this one.

Ashley Scott is on board to play Helena Kyle/The Huntress, the same role she played on the short-lived “Birds of Prey” TV series that ran for one season on The WB in 2002. It aired for 13 episodes before being canceled due to low ratings.

This is not to be confused with the upcoming “Birds of Prey” film, which will see Mary Elizabeth Winstead play the Huntress, alongside Jurnee Smollett-Bell as Black Canary and Margot Robbie returning as Harley Quinn from “Suicide Squad.”