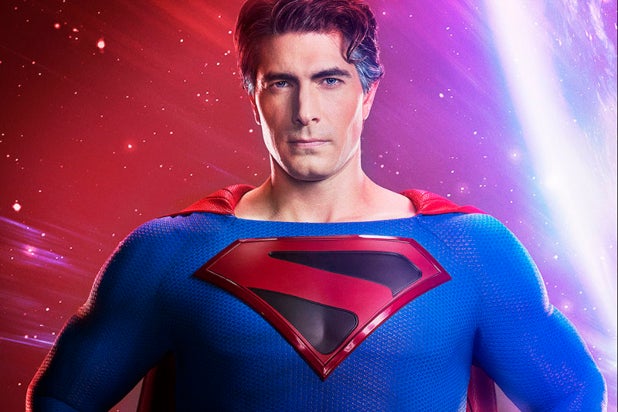 Grab your tights, heroes. The CW has released a new teaser for “Crisis on Infinite Earths,” and while most of it is just various heroes in dope outfits walking heroically, one of the heroes walking-while-looking-dope is Brandon Routh’s middle-aged version of Superman.

Comics fans know of course that Routh’s Superman is dressed in an almost exact recreation of the costume worn by the Man of Steel in the 1996 Elseworlds miniseries “Kingdom Come.” Created by Mark Waid and Alex Ross, “Kingdom Come” is set in a possible dystopian future in which the earlier generation of heroes come into conflict with their more amoral children. And yes, just like Routh, the “Kingdom Come” version of Superman has plenty of superpowered salt and pepper.

It’s not yet clear if Routh’s older Supes is from the “Kingdom Come” universe or if it’s just a fun Easter Egg, but we’ll take it either way. Watch the teaser below:

A crisis is coming. The 5-episode crossover begins Sunday, December 8 on The CW, presented by @boostmobile. #CrisisOnInfiniteEarths pic.twitter.com/PQVEQNpSxx

Yes, we’ve previously seen a still image of Routh’s new Superman — that’s it at the top of the page — but now you get to see it in action. Well, kind of. I mean, I certainly consider a dramatic head tilt to be action-ish. Look, just roll with it.

The five-part Arrowverse mega-crossover is based on the 1985-1986 DC comics crossover event by Marv Wolfman and George Perez. The story focuses on a villain known as the Anti-Monitor, who attempts to destroy the multiverse entirely. He’s eventually foiled but at a staggering cost: The surviving five universes are merged into one, most of DC’s main heroes were rebooted, and a huge number of classic DC characters were killed off, seemingly for good — including both Supergirl and Barry Allen/The Flash.

Like its comics counterpart, “Crisis on Infinite Earths” will be The CW’s biggest crossover, spanning five hours across all five “Arrowverse” shows, including newcomer “Batwoman,” and carry over the midseason break. The crossover begins Dec. 8 with “Supergirl.” That will be followed by “Batwoman” and “The Flash” on Dec. 9 and 10, respectively. “Crisis on Infinite Earths” will wrap up on Jan. 14 with “Arrow” and “DC’s Legends of Tomorrow” going back-to-back starting at 8 p.m.