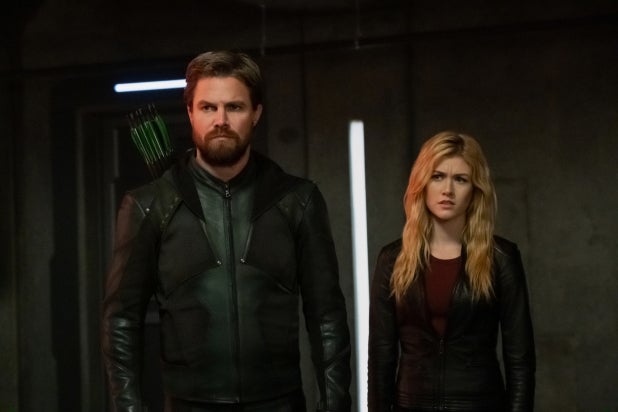 “Crisis on Infinite Earths” ended its universe-spanning first part with a moment that many viewers were probably expecting to happen closer towards the end of the epic, five-part saga: The death of Oliver Queen.

Queen’s (Robbie Amell) impending doom has been heavily teased over the last year, beginning with the “Elseworlds” crossover a year ago, when Oliver makes a deal with the Monitor (LaMonica Garrett). Then in the Season 7 finale of “Arrow” last spring, the show essentially told viewers that Queen would perish during the “Crisis” event.

“The dilemma that we presented to our own selves was that we spoiled our own story,” Marc Guggenheim, who is showrunning the “Crisis” crossover, told reporters last week, following a screening of the first episode. “If Oliver dying isn’t the surprise, what is the surprise? The timing of him dying.”

Queen dies while fighting off the Anti-Monitor’s minions on Earth-38, which ends up as an early casualty in the super-villain’s quest for multi-verse domination. Queen’s sacrifice enabled millions more to safely get off Earth and travel through a portal to Earth-1, which is the “prime” universe that the majority of the “Arrowverse” resides in.

“We kind of figured the audience was expecting Oliver to die in the climax, in the fifth hour. If we went in the exact opposite direction, and killed him off at the end of hour one, we accomplished two things: Hopefully, we do surprise the audience, that’s absolutely the intention, but we also really establish the stakes.”

Guggenheim argued that, if the first hour can kill off the flagship CW hero, “then no one is safe.”

Beth Schwartz, “Arrow” showrunner, added that giving him an early death allowed them to give the other “Arrowverse” characters like The Flash and Supergirl a justifiable amount of time grieve. “It sets up really interesting stories and conflicts between all these characters,” she said. All these leads of these different shows, who have different ways of reacting to this tragedy, and [we] get to see them all grieve together.”

Schwartz was particularly pleased with a moment early in the episode, which features a brief reunion between Oliver and Sarah Lance/White Canary (Caity Lotz), who was initially part of “Arrow” but has since moved over to “Legends of Tomorrow.”

“It was really important to me that Sarah have some really significant moments with Oliver in the beginning of this crisis, in order to remind the audience how far they go back, and how embedded her history is with his,” Schwartz  said.