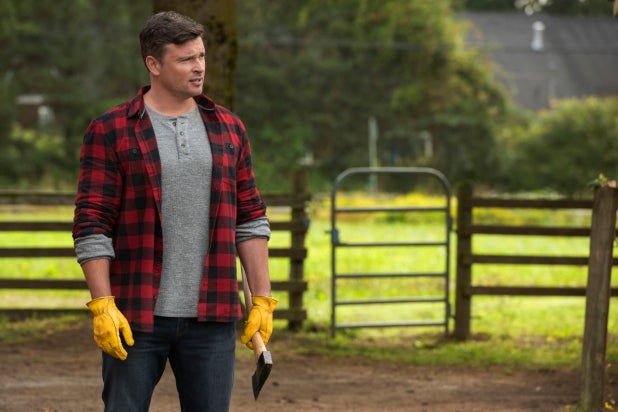 (WARNING: The following story contains spoilers from Part 2 of The CW’s “Crisis on Infinite Earths”)

“Crisis On Infinite Earths” paid a visit to Kansas during Part 2 on Monday, finally giving fans their “Smallville” reunion. It may have been a brief scene, but it finally allowed viewers to see Tom Welling return to his old role as a pre-Superman Clark Kent, picking up him and Lois Lane (Erica Durance) some 10 years later.

But for fans who were hoping they would finally see Welling put on the famous blue tights and red cape (for those that don’t remember, “Smallville” famously had a “No Flights. No Tights” rule), they were probably left a bit disappointed.

Though some shots of newspaper clippings featuring Welling’s days as the Man of Steel could be seen, he reveals to a recently-revived Lex Luthor (Jon Cryer) — who is on his own mission of eliminating every single Superman in the multi-verse — that he gave up his powers. The fact that is was Cryer’s version of Luthor, and not Michael Rosenblum, who played the supervillain on “Smallville,” was played for laughs when Kent didn’t recognize him (you may remember that Rosenblum had some issues with coming back).

“The Tom Welling/Clark Kent that we all picture, when we think of him, is Clark on the farm,” Caroline Dries, showrunner for “Batwoman” (whose crossover episode it was), said at a press screening at The CW’s Burbank office. “It felt very 10 years ago, in a great way. To us, it just felt natural, that that was his natural environment.”

Dries also teased that there was a larger reason for having Kent give up his life as Superman, but wouldn’t divulge any further because it will factor into the “Crisis” endgame, which won’t be until January. “It felt incredibly necessary in the moment,” she said.

The “Smallville” scene takes place in the same episode that also introduces Brandon Routh’s “Kingdom Come” version of Superman, who will play a much more prominent role in the crossover as one of the seven Paragons that The Monitor (LaMonica Garrett) says the team needs to find in order to stop the Crisis.

Marc Guggenheim, the showrunner for “Crisis,” said they never contemplated having all three Supermen — Tyler Hoechlin also stars as his version of Superman that has existed in the “Arrowverse” up until this point — share the screen.

“We never wrote that. We wanted Brandon at the Daily Planet, but we wanted Tom on the farm.”