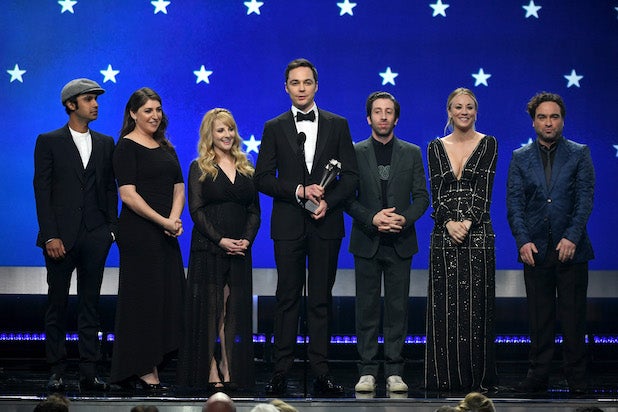 The 24th Annual Critics’ Choice Awards pulled in ratings that were even with last year’s show in the all-important 18-49 demographic on Sunday — but rose 18 percent in total viewers, according to preliminary numbers.

The year-ago Critics’ Choice Awards had a 0.3 rating and 1.283 million viewers — airing Thursday, Jan. 11 on The CW — while last night’s three-hour broadcast also put up a 0.3, but earned 1.510 million viewers for the younger-skewing network.

Meanwhile, Fox scored an easy Sunday victory in both the key demo and overall eyeballs, thanks to a very strong lead-in from an NFL playoff game between the Philadelphia Eagles and the New Orleans Saints, which spilled over by about six minutes into the rest of primetime.

That overrun gave a serious boost to Fox’s Sunday comedy line-up, including a four-year high for “The Simpsons,” which put up a 3.8 in the demo and and 10.2 million viewers, the highest same-day numbers the animated sitcom has seen since a 4.7 and 10.62 million viewers in January 2015, which also came courtesy of an NFL lead-in.

However, due to the nature of live programming, those Fox numbers above — and the ones below — are subject to significant adjustment when time-zone adjusted final figures come in later Monday.

NBC was fourth in ratings with a 0.6/2 and in viewers with 2.5 million, filling its primetime block with a telecast of “Harry Potter and the Sorcerer’s Stone.”

Univision and Telemundo tied for fifth in ratings, each with a 0.5/2.

Telemundo was seventh in viewers with 1.2 million.

The CW was seventh in ratings with a 0.3/1 and sixth in viewers with 1.5 million, airing the 24th Annual Critics Choice Awards throughout primetime.