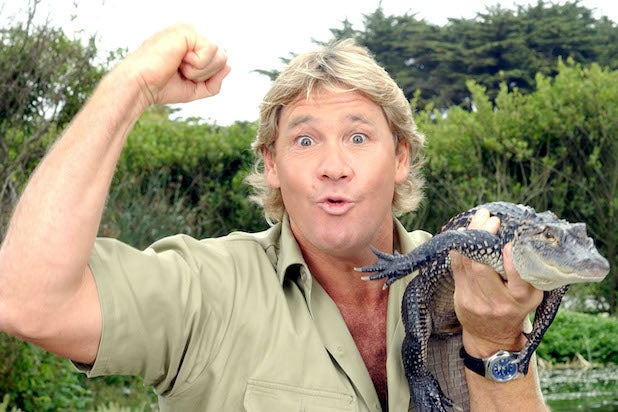 Discovery boss David Zaslav said Monday that he’s in no rush to bring all his talent back into the studio, and it has all to do with the success story of none other than Steve Irwin and his show “The Crocodile Hunter.”

Speaking on the MoffettNathanson Media and Communications Summit Monday, Zaslav said he learned from watching “The Crocodile Hunter” that a show didn’t need to be slickly produced in order to get huge ratings.

“I had this experience when I was at NBC. We had bought National Geographic, and it had incredibly beautifully shot, 12 cameras, the voice of God, you got to see some animal that no one would ever get to see on Earth,” Zaslav said. “And then all of a sudden, (Steve) Irwin comes on Animal Planet and starts opening up the mouths of crocodiles, does very unpredictable [things], jumps into the swamp — and it’s getting five-times the rating.”

Also Read: Why David Zaslav Thinks Delayed Tokyo Olympics Will Be Even 'Better' for Discovery

The model that proved successful for Irwin is the same whether it’s Guy Fieri or Mike Rowe broadcasting from their living rooms. People are enjoying the novelty of what these creatives can do from the comforts of their own homes.

“What we realized then is that steady camera is not as attractive as the unstable camera,” he continued. “Because the unstable camera with the unpredictable host that wants to be close to nature, that’s closer to real, people can relate to that more. I think we’re learning– more authentic is good, and we don’t need to listen to the production companies about the high-level shoot.”

Zaslav added that the homemade content shot on a GoPro or iPhone ends up feeling “significantly more authentic,” and it’s being produced at “a tenth or a fifth of the cost of shooting at a studio.”

“We’ve got to really assess… the basket of content. Why are we dragging everyone to the studio? Let’s shoot it in the home,” Zaslav said. “The cost is dramatically less and the audience is lighting up on social media, going, ‘Look, Guy (Fieri) is in his living room.”

“The Crocodile Hunter” aired for eight seasons on Animal Planet, concluding in 2004. Irwin died in 2006.