In the week that Disney’s “Cruella” was made available for free on Disney+ after previously being a Premier Access title on the streaming service, the movie starring Emma Stone was the third most-streamed title on the web, according to Nielsen’s weekly streaming rankings.

Nielsen says that “Cruella” was watched for 815 million viewing minutes in its first week available for free on Disney+, which covers the week of August 23-29. It was the third most-streamed title among all movies and shows and easily topped the list of movies for the week.

“Cruella” did well on Disney+ even when it was available for a $30 charge, remaining among the top 10 movies for five straight weeks, but Nielsen says that back in May it only topped out at 362 million viewing minutes compared to the 815 million it put up in August. 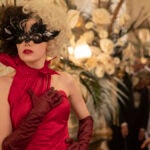 For another comparison, Disney’s “Raya and the Last Dragon” had its own spike when it became available on non-premium Disney+, logging 1.078 billion viewing minutes during the week of May 31.

“Cruella” was the one Disney+ title to crack Nielsen’s Top 10 in this particular week, and only one of two movies, the other being Netflix’s “Sweet Girl.” That film, starring Jason Momoa and Isabela Merced, logged 519 million minutes, good enough for #8 on the overall list and #2 on the movies list.

“Cruella” is directed by Craig Gillespie and stars Emma Stone as the monochromed “101 Dalmatians” villain Cruella de Vil in a prequel film. Despite being a Premier Access title, it grossed $86 million domestically at the box office and $233 million worldwide, and the film is already spawning a sequel. 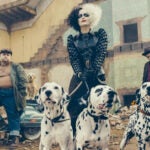