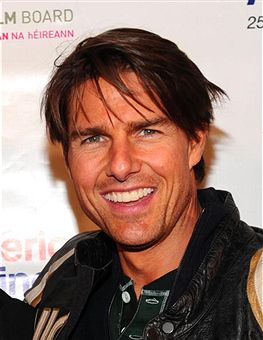 On the spurs of Jeff Bridges’ Oscar glory, Tom Cruise and Reese Witherspoon are eyeing lead roles in the rodeo-themed love story "Paper Wings," according to the L.A. Times.

Cruise would play a rodeo champ who falls head-over-cowboy-boots for an up-and-coming country singer. The 34-year-old Witherspoon strikes me as a bit old to be up-and-coming, not to mention her career effectively peaked with her Oscar win for playing a similar role in "Walk the Line," but it’s possible a pairing with Cruise could be just the career boost she needs.

Speaking of careers in need of boosting, let’s talk Cruise. I truly believe the three-time Oscar nominee ("Born on the Fourth of July," "Jerry Maguire," "Magnolia") is one of the best actors working today, and because of his movie-star good looks and knack for creating kooky controversy, he doesn’t get the full credit he deserves.

Having now gushed over the actor, however, I must confess that I just can’t picture him as the rodeo cowboy type, nor do I really want to see him buck around on a bull at nearly 48 years old. I probably felt similarly cynical when it was announced Cruise would play "The Last Samurai," and I wound up enjoying that movie for the most part.

So while this part may not be an ideal fit for the actor, there’s no doubt in my mind that Cruise will deliver the goods with the same conviction he always has.

Will Smith’s company Overbrook will produce the picture, so it comes as no surprise to learn that Gabriele Muccino ("The Pursuit of Happyness," "Seven Pounds") is in the mix to direct along with several other filmmakers.

Sony is developing the long-gestating project, which was originally set up at New Line.

Cruise has the spy romantic comedy "Knight & Day" coming out this summer, and is currently searching for a "Mission: Impossible IV" director. Witherspoon has recently been linked to "The Pioneer Woman," and will next play a softball star in James L. Brooks’ dramedy "How Do You Know" opposite Owen Wilson, Paul Rudd and Brooks regular Jack Nicholson.

The L.A. Times story credits "Crazy Heart’s" breakout success with the country/western-themed project’s rise in stature at the studio, despite the fact that rodeo-set movies haven’t traditionally done well at the box office (see: "8 Seconds" … or don’t). To date, "Crazy Heart" has only taken in $36 million domestically despite all the publicity surrounding Bridges’ career-topping performance. Cruise’s movies usually open to that amount, if not more.

Why not just remake "Urban Cowboy" and call it a day?