Tuesday night’s final performance show left me a little fearful to make a prediction as to who your next American Idol will be, America. 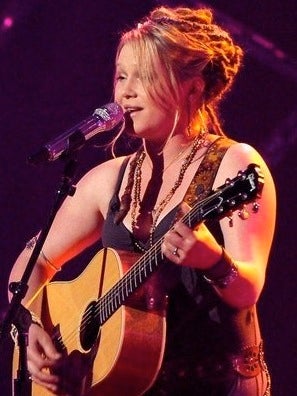 From the very beginning, Crystal Bowersox has been deemed “the one to beat.” Only recently did the judges, in an apparent attempt to make the competition seem like, well, an actual competition, start to pimp out Lee DeWyze to the voting public. Well, call me the stereotypical gullible American, but I’ve gotta say that it kinda worked on me. (Then again, I still believe that you can find love at the Jersey Shore.)

The thing that Lee has over Crystal is story arc. I’ve gotta say that he flat-out bored me in the beginning. His nervousness on stage was only rivaled by my beloved Alex Lambert (RIP, Alex!) and he showed absolutely no ability to emote. But then came the Hometown Visit, where he actually got choked up. Good. But choking up in the paint store where you used to work as a salesman? Golden. Zero to hero kind of stuff.

Last night Lee continued on his journey to emotional availability by — gasp! — almost smiling as he sang his personal song choice, “The Boxer,” from Inspirational Week.  The choice was a no-brainer, as it was one of his most lauded performances and also the song he chose to sing for his hometown crowd, where he also choked up. Simon wanted more “passion and excitement” from him but it’s hard to teach an old dog new tricks, isn’t it? 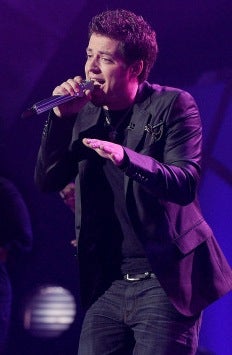 Bowersox also chose a number that the judges loved the first time around, “Me and Bobby McGee.” The difference between her performance and Lee’s? Well, she sung the hell out of hers. There was no comparison. That being said, does that make her the American Idol? If we’re basing it purely on singing, then yes.

But Crystal doesn’t sing the kind of music that I would buy so I can’t vote for her with a clear conscience. I felt she was just a wee bit cocky throughout the season as well. Also, while it is somewhat admirable that she didn’t change herself too much for the competition, it’s also kind of annoying. Who wears a tarp to compete on (what once was) the biggest show in the country anyway?

As for the producers’ song choices, DeWyze did a pleasant version of R.E.M.’s “Everybody Hurts” complete with a (no fair!) gospel choir yet again. I often wonder if the contestants are choosing these arrangements or if the producers are giving them ideas. I’ve said it before and I’ll say it again: everyone sounds better with a gospel choir and/or strings behind them.

Crystal, on the other hand, was saddled with Alannah Myles’ “Black Velvet,” which is number one on my list of songs that remind me of fingernails on a chalkboard. (Right above “Walking in Memphis”) I have to say, though, she did a lot with a crappy song. And all while wearing a dress that would be perfect for the Winter Formal … back in 1989.

Then it was time for the final performances of the night, when each Idol would perform his or her coronation song were he or she to be crowned American Idol. With a legacy ranging from masterpieces to disasters, the “AI” coronation song has become a tradition as iconic as “There She Is, Miss America.” Some of the songs, admittedly, are more iconic than others. (The Kara DioGuardi-penned “No Boundaries,” anyone?)

The perfect song must (1) sound like a hit (2) make the singer sound like a star and (3) have an emotional impact. I mean, who could forget where they were when Kelly Clarkson tearfully warbled out the quintessential “A Moment Like This?” I know I can’t; I was in the very last row of the Kodak Theatre crying with some of my gays! (Mission accomplished, producers!)

So why, then, would they choose to mess with a sometimes-winning formula by allowing the Idols to release cover songs as their first single this time around? Maybe because it’s not always so winning. Many of the songs have been cheesetastic (“Do I Make You Proud?”) or tepidly “just OK, dawg” (“This Is the Time of My Life”).

Still, I was a little bit shocked at this new development. That being said, “Idol” has always been all about song choice, so, appropriately enough, it was song choice (and singing) that just may have decided our American Idol this year.

If Crystal outsinging him didn’t put the nail in Lee’s coffin, then his song choice, U2’s “Beautiful Day,” certainly did. Why would you pick a song that everybody knows backwards and forwards and do absolutely nothing new with it?

Crystal, on the other hand, chose wisely with “Up to the Mountain.” No one knows it well enough to be sick of it and, hence, she can sing it however she likes. And sing it she did. Bowersox again sang the hell out of her last song, prompting Simon to give his final critique as an “American Idol” judge: “That was outstanding.”

So who wins? After last night’s performances, it would almost be an outrage if Crystal weren’t crowned. Then again, the show was designed to give a break to talented people from everyday walks of life. In my humble opinion, Lee is the one who best fits that description and Simon as much said so last night.  He has grown the most as an artist, whereas Crystal, much like Adam Lambert, came into the competition as an artist already in full bloom.

The question to be answered tonight is: can you come in as an Artist and go out as an American Idol?