With fans of dramatic television migrating to cable, CBS has relied for the past decade on the groundbreaking “CSI” franchise to keep viewers watching at 9 and 10 p.m. The three stylish procedurals, set in Las Vegas, New York and Miami, were created and are run by Anthony Zuiker, a fast-talking story hustler, who this week addresses the National Association of Broadcasters at its annual convention in his Vegas hometown.

Zuiker spoke with Eric Estrin about selling high school and college essays for $300 a pop, his million-dollar script that wasn’t, and why he does his writing at Santa Monica’s Broadway Deli. 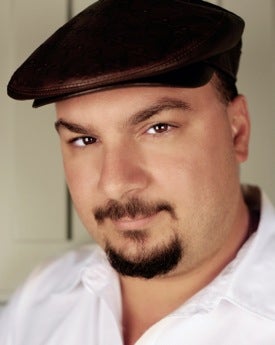 I was born in Blue Island, Illinois, but I moved to Vegas with my mother when I was six months old. My buddies and I grew up in the casinos. We worked in casinos. We were the “Entourage” kids growing up — pretty much doing our thing in Vegas.

I got my writing start by writing people’s essays for money in college and high school. I would charge $300 to write 10 pages in one night, and I was booked solid for years.

There’s a buddy of mine who now works with me on “CSI” — Dustin Lee Abraham. We were both competing in high school forensics — speech, not forensics medicine — and I used to write his monologues. And he won a lot of tournaments. He beat me to Hollywood and began to take meetings and perform in front of people with these monologues I’d written for him in college.

Meanwhile, I was in a terrible job as a tram host at the Mirage. I rode the tram back and forth from the Mirage to Treasure Island for $8 an hour on the graveyard shift. I didn’t like my boss; my boss didn’t like me.

Then one day an agent at William Morris — her name was Jenny Delaney — called me up at work and said, I’m Dustin’s agent; I’ve heard some of the monologues you’ve written — have you ever had any thoughts about writing a screenplay?

I said no, but she said, if you write me something great, I’ll consider representing you. So I walked to a bookstore and bought the book “Screenplay” by Syd Field, or “The Art of Screenwriting,” one of the two, and wrote a movie called “The Runner” on spec.

It was based on a job Dustin had back in the early ‘90s as a runner. A runner was a guy who went from sports book to sports book, jotted down the betting lines, and phoned them into an underground bookie back East. In turn, the bookie provided the best lines for his clients, and then the runner would place bets for them at the casinos. This, of course, was before the Internet.

I gave the script to William Morris. Someone covered it over there and recommended a pass, so I never signed with Jenny Delaney.

So I gave it to a couple of friends of mine, who hooked me up with Mike Marvin, the producer of the ski movie, “Hot Dog.” We all drove out from Las Vegas to sit down with him at the Broadway Deli in Santa Monica. I currently do all my writing there, as a sort of fun memento of that occasion.

Anyway, he gave us the “Yeah, yeah, everyone’s got a screenplay, kid” speech, and we drove back home. But then he called me at work at the Mirage and said, This is fantastic. I think my business partner wants to buy it.

His business partner was Ron Moler, the owner of an agency called Aspect Ratio on Cahuenga. And he wanted to direct the film. Being in a rush and being so excited, I sold the screenplay to Ron for $30,000. I had no representation at the time, so I typed up my own good faith agreement on his little s—ty Macintosh.

We got private funds, and he directed it for around $8 million. It turned out bad. It went right to video. It was a little indie film that didn’t quite make it — but during the course of the project, it did get me signed with CAA.

At the end of the day it probably worked out best, because if they had bought the movie at Columbia/TriStar, there’s a pretty good chance they would have replaced me immediately. The way it happened, I didn’t make the money, but I was there from the beginning of the shoot, did all the production rewrites. I was the sole writer.

I stayed loyal to Ron because he gave me my shot, and in return, I received enough production experience, on-set experience and editing experience to hold my own as a showrunner once “CSI” got greenlit.