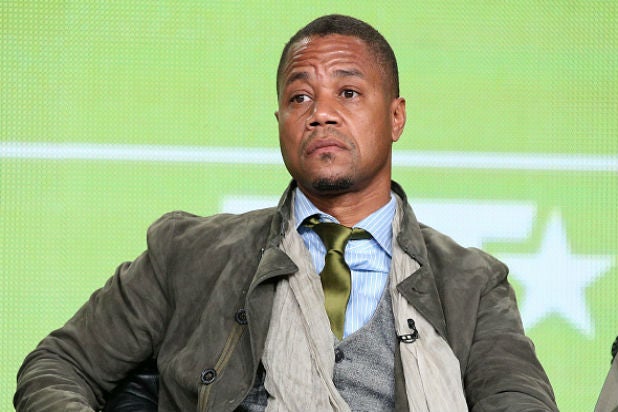 If he lifted the skirt, was he being a flirt?

Cuba Gooding Jr. is attempting to acquit himself, after drawing criticism for lifting his “American Crime Story: The People v. O.J. Simpson” co-star Sarah Paulson’s skirt during a Paleyfest panel, telling Extra that the moment was “misinterpreted on a sexual level.”

Saying that he and Paulson have “a very playful banter,” Gooding — who played O.J. Simpson opposite Paulson’s Marcia Clark on the hit FX series — added, “I respect her for the actress and the lady that she is and you know we … in that instance of us ribbing and playing with us it was misinterpreted on a sexual level, which was horrible.”

Nonetheless, Gooding said, when the online backlash came to his attention, “I immediately sent her a bunch of texts and she said ‘I love you too.'”

Gooding gave Paulson the wardrobe lift in late March during a panel for the FX series “American Horror Story: Roanoke,” which the pair also co-starred on.

Online reaction was harsh, with one critic of Gooding tweeting, “What happened to Sarah Paulson yesterday at #PaleyFest was so disrespectful and definitely NOT OK or funny” and another wondering, “How would @cubagoodingjr react if a man walked up to his daughter, Piper and lifted her dress up behind her back? #itsneverok.”

Watch Gooding discuss the outrage in the video.