The leading company in advanced facial tracking isn’t found in Silicon Valley or Los Angeles’ booming gaming industry, but instead located more than 5,000 miles away in the northern city of Manchester, England.

Cubic Motion is at the forefront of real-time facial tracking, a technology that will eventually span several mediums, but is an especially important step in the evolution of video games.

And when it comes to games, Wood knows the industry about as well as anyone. The affable Brit cut his teeth in the gaming business at Activision, before moving on to start a game marketing company — a place where he was involved with 50 top-sellers, including Mortal Kombat and FIFA.

Now at Cubic Motion, Wood and his team of 70 have developed the first tech to follow a human’s facial movements in real-time and translate them into a game setting. It’s an innovation that leads developers from across the world to seek out the Manchester company. 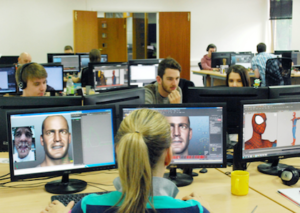 “The paradigm shift for us happened at [the Game Developer Conference] last year, when we were invited to to help Epic Games, to do performance of a real human being driving a computer avatar in a real game world in real-time,” said Wood.

The result was game-changing, with Cubic Motion helping to stage a demo of “Hellblade” with tracking of 200 facial features, right down to the eye movement. Check out the video below for a better look.

With Cubic Motion being the first company to pull this off, it’s easy to see why they’ve worked on major titles like “Call of Duty: Modern Warfare Remastered” and “Batman: Arkham VR & Batman: Arkham Knight.” And after a similar demo at Siggraph in 2016, it was awarded the computer graphics convention’s Real-Time Graphics & Interactivity Live Award.

At the same time, Wood sees this tech changing more than the gaming world. The company is on the cusp of a new capital raise that will allow further expansion.

“This is a good time for us to get deeper with the [visual effects] companies and the film companies because there are a number of benefits now to using our tech,” said Wood. “One is that a live action director can direct the [computer graphics] version of the character, so they can talk to the screen rather than the actor or actress, which is great,” he added, also telling TheWrap to stay tuned for more developments in virtual reality.