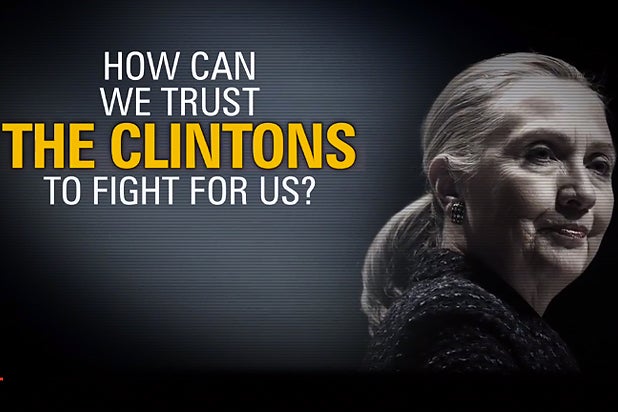 Hillary Clinton was among ecstatic fans celebrating Saturday night when the Chicago Cubs beat the Los Angeles Dodgers to advance to the World Series for the first time since 1945, breaking a decades-long curse.

However, the appreciation between Clinton and the team is decidedly not mutual, as during the decisive Game 6 Saturday on Fox Sports 1, Clinton was bashed in several political ads painting the Democratic presidential nominee as being anti-women and responsible for the 2012 Benghazi attacks.

The ad was from the Super PAC called Future 45, which is funded by famous Republican billionaire Sheldon Adelsen and the Ricketts family, who own the Chicago Cubs.

World Wrestling Entertainment (WWE) is also listed as a top organizer with $200,000 in contributions, according to the Center for Responsible Politics.

On its official website, Future 45 is described as “an independent organization devoted to educating voters about the challenges facing our country and making sure that the 45th President of the United States has the character and trustworthiness necessary to restore leadership to the White House.”

While the ads never mention Donald Trump by name, the website does have paragraphs supporting Trump, calling him “a successful businessman that can create prosperity in our nation again.”

Check out the ads below: