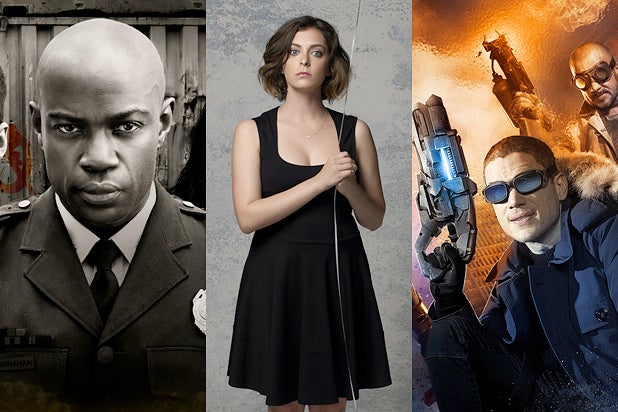 Ahead of its 2015-16 upfront presentation in front of advertisers, The CW president Mark Pedowitz dove deep into the youth-skewing network’s new schedule.

The CW will launch only one new show in the fall, “Crazy Ex-Girlfriend,” which will lead into the network’s first major award winner,” Jane The Virgin,” on Monday nights.

“Crazy Ex-Girlfriend” was originally conceived as a half-hour comedy for Showtime, and some changes had to be made in order to make it viable as a CW show instead.

“Some modest language choices,” Pedowitz said of the changes. “When they pitched it to us… it was originally geared towards development in 16-17, but the more we talked about it and the more the script expanded to allow it to become an hour, we said this was the perfect companion for ‘Jane.’ It’s funny, [series lead] Rachel bloom is hilarious. It’s different, with a very dark twist and we are very proud to have it.”

The network’s most high-profile new show, “Arrow”-“The Flash” spinoff “Legends of Tomorrow,” is being held for midseason, but Pedowitz is already high on the show living within the same universe as his other two DC comic book adaptations. So it is possible he will have 3 shows within the same small-screen universe on the air at the same time in 2016?

“It is a possibility,” he said. “Characters criss-cross as needed and we’ll apply big crossovers at the right time. They will live together as 3 shows.”

Pedowitz described the new show as “The Dirty Dozen with redemption,” and confirmed a popular fan theory that Caity Lotz will be playing a comic book character called the White Canary — and her resemblance to Sara Lance, the deceased sister of Katie Cassidy’s “Arrow” character Laurel Lance, will be revealed in the upfront presentation for the show.

Also moved to the midseason is “The 100,” which Pedowitz calls a “critically acclaimed show” that he hopes fans will rediscover and catch up with on Netflix.

Also Read: 'Hart of Dixie,' 'The Messengers' Canceled by CW

“I am happy to have a critically acclaimed show like that to come in at midseason,” he said. “It’s a real Netflix favorite. Hopefully the show will be getting the due it deserves and have a real ‘Breaking Bad’ moment.”

Among other changes to the schedule, Pedowitz admitted to moving “Reign” to Fridays from its original Thursday at 9 time slot in order to get it away from “Scandal.” He’s also still high on “The Vampire Diaries” despite its leading lady, Nina Dobrev, leaving the show after the current sixth season.

Also Read: 'Arrow' Season Finale: A Death, an Explosion and an Unmasking

Next season will focus more on the two Salvatore brothers she leaves behind, according to Pedowitz, who referenced another show about two brothers that has been running on The CW for 11 seasons — “Supernatural.”

A “Supernatural” spinoff was in development before being killed, but Pedowitz says the possibility is still there. Meanwhile, he continued to play coy on another possibility that has been rumored in recent weeks: Is the network in talks to pick up the DC comic book adaptation “Constantine,” which was recently canceled by NBC?

“There are also rumors that I’m joining the NBA,” the exec joked. “As of right now, it’s just a rumor.”