The CW is saying goodbye to several of its shows ahead of its upfronts presentation next week.

“In the Dark” is also not returning beyond the season that has yet to premiere.

“Charmed,” “Dynasty,” “Roswell, New Mexico” and “4400” were all revivals of previous series, while “Naomi” was a DC superhero series written and executive produced by Ava DuVernay. 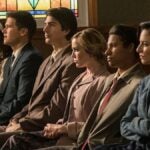 Also Read:
‘Legends of Tomorrow’ Canceled at The CW After 7 Seasons

“Naomi,” which starred Kaci Walfall as a teenager who realizes she has a hidden destiny, had The CW’s third-most watched season premiere of the 2021-22 season, but lost more than 40 percent of viewers by the time of its May 10 finale.

“Dynasty” first debuted in 2017 on The CW. It ran for five seasons.