The CW, which has already mounted revivals of "Beverly Hills, 90210" and "Melrose Place," may not be done mining the TV vaults for new series ideas.

"There are other shows we’re looking at that we’d possibly think about (bringing back," CW Entertainment chief Dawn Ostroff told TheWrap Tuesday, just after her formal presentation to reporters gathered for the network’s portion of the TV Critics Assn. press tour.

Ostroff wouldn’t talk specifics, but she said there’s still room for more remakes, even on a network that only programs 10 hours per week. 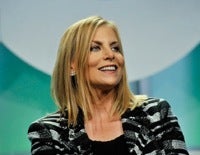 "When you do a remake of a show, you have built-in brand equity, which is a huge asset for us," she said. ""And look at how many feature films…are taking old television franchises and trying to make a go of it. If we can make a great updated version of something, we’d be open to it."

But don’t younger viewers want shows to call their own?

"We really honed our brand and started to generate some serious momentum," Ostroff told reporters. "Headed into next season, we’re looking to make our schedule even more cohesive."

Ostroff also noted the CW’s impact off-air, hyping numbers for the network’s streaming videos and the fact that viewers are "Tweeting about the CW once per minute."

"It’s vital our brands extend beyond TV," she said, adding that the CW’s core audience relates differently to the network compared to other broadcasters.

"It’s almost like we’re a magazine, where they come to us to find trends," Ostroff explained.

Ostroff, of course, didn’t make note of the CW’s annual summer ratings swandive. As it has for the past few summers, the network has fallen off the radar during the off-season, barely registering on the Nielsen radar thanks to a lineup of mostly serialized drama repeats.

While other broadcast networks have ramped up original programming in the summer– to decidedly mixed results– Ostroff said such a strategy didn’t make sense for the CW.

"We had to look at our business model," she said. "Cable has their own season. We have our own season. We’re marching to our own little drum. This makes more sense….We’re trying to do what works for us."

Ostroff continued to be peppered with questions about two shows from the 2008-09 development season that didn’t make the cut: The "Gossip Girl" spinoff and the D.C. drama "The Body Politic."

‘"It was ‘Sophie’s Choice,’" Ostroff said of last year’s development, arguing that for the first time in her career, every show she developed for this season "could have made it on the air." But with limited financial resources and timeslots, the CW could only pick three shows for fall, she said.

"We would have been happy to have all the pilots on the air," she said.

–Expressed hope that "Smallville" and "Supernatural" will both be back beyond this upcoming season.

–Said the CW still was out of the half-hour comedy business, barring a great idea. "I don’t know if we can make sitcoms that can make enough noise and stand out," she said.

–Defended the network’s focus on under 35 women. "There’s nothing wrong with us specifically going after young women," she said. "We’ve made a real name for ourselves with advertisers. There’s value in being able to program to a specific group."