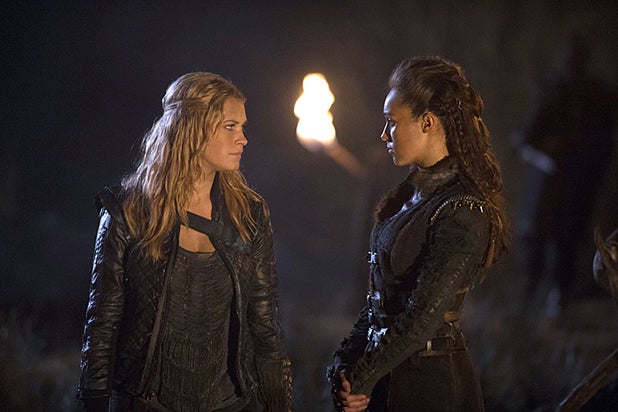 Spoiler Alert: Do not read any further if you don’t want know what happened on Wednesday’s episode of “The 100.”

The CW has its first LGBT lead character of the season.

“Clarke is a bisexual character,” he said. “Remember that in this society, no one’s worried about it. They’re worried about spears to the chest.”

Clarke’s previous romantic history on the post-apocalyptic drama consisted of a short-lived tryst with a male character.

Rothenberg previously teased the revelation of Clarke’s sexuality when a fan asked whether it had been addressed on the show.

“Yet to be addressed,” he tweeted in January. “But sexuality in the world of The 100 isn’t binary. No one cares who you love.”

“The 100’s” Clarke may just be the first LGBT first-billed character in the short 6-year history of the network, and she’s definitely the first of the shows currently airing on the network.

The network’s “Jane the Virgin,” “Arrow,” “The Flash,” and “Hart of Dixie” all currently feature LGBT characters, though all are recurring and not series regulars.

Clarke is a bisexual character. Remember that in this society, no one’s worried about it. They’re worried about spears to the chest. #The100