It’s been a busy few days for former “Sex and the City” star Cynthia Nixon and ex-Playmate Karen McDougal, with both dominating headlines this week for their forays into politics and public challenges to noteworthy men holding elected office.

Now in a bizarre twist, it appears the pair also share a similar sense of fashion, with both women wearing the virtually identical blue dresses in high-profile media appearances this week.

While we can’t be certain, the record looks incontrovertible. 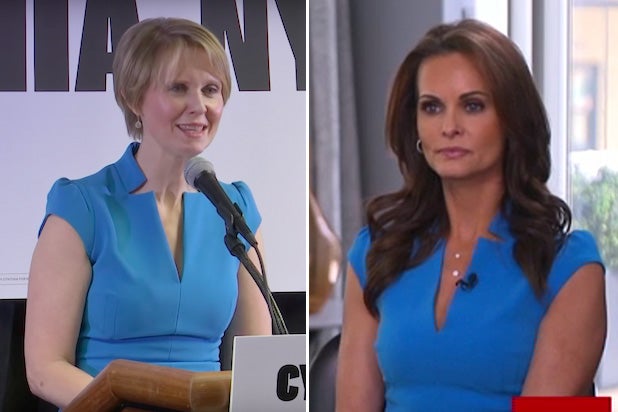 The designer and model of the dress remains unclear. Reps for Nixon and McDougal did not immediately respond to requests for comment from TheWrap.

On Tuesday, the day after Nixon announced plans to challenge Andrew Cuomo for governor of New York, she attended a kickoff event in the Brownsville neighborhood of Brooklyn.

Under a long jacket, the “Sex and the City” star headed to the event (by subway of course) in a fitted, sleeveless, pale blue dress with a deep and narrow V neck.

On Thursday, Karen McDougal, who has said she had a passionate affair with Donald Trump in 2006 and 2007 — while he was married to his third wife, Melania — wore what appears to be the exact same dress during a prime-time interview on CNN with Anderson Cooper.

McDougal made headlines from coast to coast in the United States for remarks to Cooper in which she apologized to First Lady Melania Trump and said that the future president told her she reminded him of his daughter Ivanka.

The president has consistently denied that any affair with McDougal took place.