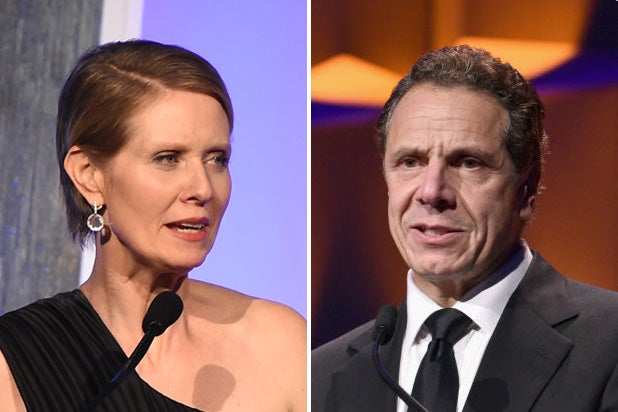 The race was called by the New York Times less than an hour after polls closed, with Cuomo ahead of the former “Sex and the City” star by more than 30 percentage points.

Cuomo, a two-term centrist Democrat widely seen as eyeing a run for president in 2020, prevailed against the Emmy-winning actress in a victory that all but assures him a third term.

Cuomo will face off against Republican Marcus Molinaro in November’s general election but is already the heavy favorite to win in the strongly Democratic state.

Though Nixon lost easily, her campaign still had a strong effect on the race. Cuomo declared his support for a number of liberal causes in response to Nixon’s self-proclaimed Democratic Socialist platform, including the legalization of marijuana and the expansion of voting rights.

The governor, whose brother is CNN anchor Chris Cuomo, has long been a part of New York Democratic politics.

His father, Mario Cuomo, also led the state as governor for three terms between 1983 and 1994 and long flirted with a White House run. Despite the legacy, Andrew’s leadership has come under growing criticism in recent months, with particular ire saved for regular users of New York City’s crumbling subway system.

In one instance highlighted by the New York Times, the governor diverted critical funds meant for city’s subways to bail out a bankrupt ski resort in upstate New York.

There was speculation after Cuomo won that Nixon may choose to run as an independent in the general election. But in a statement to supporters, also released as a series of tweets Thursday night, Nixon appeared to rule that out. She instead celebrated the impact her campaign had on Cuomo’s political positions, and vowed to hold him to those positions.

This isn’t just a symbolic victory. This campaign forced the Governor to make concrete commitments that will change the lives of people across this state.

Last year, the Governor opposed recreational marijuana. We came out strongly in favor of legalizing it as a matter of racial justice, and the next day, the Governor declared that “the facts on marijuana have changed.”

On the same day that we released our climate justice plan in the Rockaways, the Governor reversed himself and halted the construction of a pipeline that would’ve devastated that community’s water and health. #TheCynthiaEffect

As progressives and New Yorkers, we have to hold the governor accountable for the commitments he’s made over the last 6 months. But these are real victories. Some people have called this #TheCynthiaEffect. I call it what happens when we hold our leaders accountable.