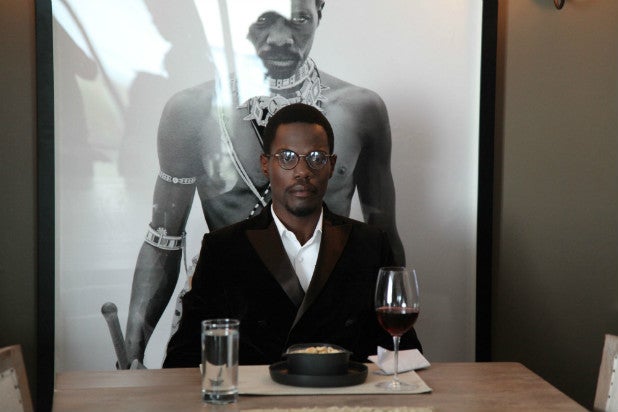 Funded by fans and initially shrouded in secrecy, writer-director Spike Lee‘s latest joint, “Da Sweet Blood of Jesus,” has finally revealed itself to be a project of no small interest to cult-film fans; it’ll also be of interest to see how Lee fares outside the studio system with a film that — despite its matter-of-fact status as a remake of Bill Gunn’s sui generis 1973 film “Ganja & Hess” — also stands as a reminder of what an artist as independent as Lee can do when given more than a little actual independence.

Like Gunn’s original film, the story revolves around Dr. Hess Green, a well-to-do archaeologist with a luxurious life and a thirst for knowledge played by Stephen Tyrone Williams (“The Knick”). When his new, erratic assistant Lafayette Hightower (Elvis Nolasco) stabs him with an ancient Ashanti dagger, he dies only to awaken with a strange strength and a thirst for blood. This isn’t vampirism; the undying blood drinkers of Europe are declassé come-latelies compared to the ancient myths that have befallen Dr. Hess.

For a while, Hess adapts to his new life of conspicuous privilege and hidden hungers. Despite reproducing shots, scenes and dialogue from Gunn’s original film (to such a degree that Lee gives the late Gunn, who died in 1989, co-screenwriting credit), “Da Sweet Blood of Jesus” also breaks away on its own to ask questions Gunn could never have conjured (What happens when your thirst drives you to drink HIV-infected blood?) even as it circles back to the themes and topics discussed in the original: power and race, faith and servitude, sex and desire. It’s as easy to picture Lee addressing these topics face-on, of course, as it is to imagine any studio running away from those ideas in sheer terror.

When Hightower’s wife Ganja (English actress Zaraah Abrahams) turns up looking for her late husband, she and Hess click almost immediately, and despite her mounting realization that Dr. Hess is not as he seems, she finds herself drawn to him. And he wants to share his immortal longings with her. Much as in George Romero’s 1977 “Martin” (like “Ganja and Hess,” another genre film from the ’70s more interested in deconstructing genre tropes than repeating them), “Da Sweet Blood of Jesus” isn’t about people who take delicate sips from their victims like they were kids with juiceboxes; this is primal, ugly stuff that looks at the reality behind the fantasy even as it invokes and twists one of the bedrock Christian ideas, as stated in John 6:54: “Whoever eats My flesh and drinks My blood shall live forever.”

Lee keeps his film in line with the original’s near–Hammer horror levels of grandiose style: all of the cars are vintage Rolls-Royces, while Hess’ home is the epitome of taste, right down to the excellent wine cellar Ganja may not enter without him in tow. But there’s also comedy here, too, from Rami Malek’s turn as Hess’ confounded butler to a lawn party where Martha’s Vineyard socialites who want to talk race in America think Dr. Hess’ red, thick afternoon drink is just the world’s worst Bloody Mary.

The most telling alteration from the original may be symbolic: In “Ganja & Hess,” the transforming dagger was a sharpened piece of broken bone, whereas for Lee, the dagger is forged metal, broader and sharper than Gunn’s vision. You could also say the same for “Da Sweet Blood of Jesus.”

The film makes attempts at atmosphere that occasionally spiral off into the ether, but it also builds a strong and distinctive mood for itself. Pop artist Bruce Hornsby provides Lee with the score, while the soundtrack runs the gamut from new-school hip-hop and modern Gospel arrangements to Brazilian jazz-pop, always precisely in (or out of, but with purpose) tune with the action and scene. The film’s pacing goes from leisurely to the too-long, but at the same time you can’t deny Lee’s attempt and artistry in bringing big issues to the forefront: class and murder, race and faith, colonialism and capitalism, all summed up in a final act that reminds us actions have consequences, and consequences live on long after mere death.

Unrepentant, uneven and unique, “Da Sweet Blood of Jesus” proves that Lee can still make a film worthy of the arguments it will most certainly start.