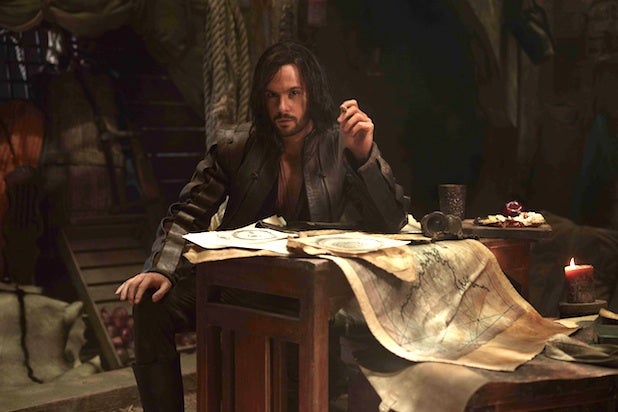 One of the most popular (and certainly the most controversial) episodes from the first season of Starz’s “Da Vinci’s Demons” was the one on which Leonardo (Tom Riley) went on trial for sodomy and it was revealed that he was bisexual.

Despite the popularity of the episode, an individual close to the production told TheWrap that the series was backing away from Leonardo’s bisexuality on the upcoming second season, which finds Florence in chaos and continues Leonardo’s dark quest to find the fabled Book of Leaves and uncover the secret history of his mother.

When asked about what we had heard regarding Leonardo’s sexuality on Season 2, “Da Vinci’s Demons” creator David S. Goyer told TheWrap, “I don’t think that’s accurate.”

“We’re not backing away from it and we will get back to it should we go into another season,” he explained. “It was just that that was part of the plot of the show in [the first season’s] Episodes 4, 5 and 6. It just doesn’t apply to this plotline. We don’t want to throw it in gratuitously… The sodomy trial was something that happened during the year that our show was taking place. It felt disingenuous not to do it.”

For the record, Goyer also said, “I’m pretty sure the real Leonardo was bisexual.”

“It’s not like Starz said, ‘Don’t do that anymore.’ It’s just that the story went into a different direction on Season 2,” he added. “It’s discussed several times on the second season. It’s not like it never happened.”

In advance of the sodomy trial episode’s airing, series star Riley spoke to gay entertainment news site The Backlot about the episode. Some of what he said about labeling Leonardo’s sexuality angered readers to the point that the actor felt compelled to issue a statement explaining what he meant.

When asked how the series will handle Leonardo’s sexuality on Season 2, Riley told TheWrap, “For us, it was always that his quest trumped everything else.”

“Actually, he doesn’t really engage in any sex with anyone this season,” he continued. “But, certainly we show elements between him and Zoaraster, there might be something there. They might be in love. And that’s what keeps them together, even though they’d never admit it to one another.”

Like Goyer, Riley said that no one involved with the production made a decision to avoid Leonardo’s bisexuality on Season 2.

“If it had been a show about someone who had referenced their own sexuality and we eradicated all that, it would have been unforgivable,” he said. “But, Leonardo didn’t. He refused to write anything down. So for us, we wanted to explore what would make him not want to define himself. Why would he not do that? We never thought we’re going to eradicate this to please Middle America. It was about what was the most interesting story.”

He added, “It was about why would a man like that defy definition. He just likes everything. He was just curious by nature. He loves women. He loves men. And that’s not going to stop.”