Netflix’s new sitcom “Dad Stop Embarrassing Me” stars Jamie Foxx in a story that’s loosely inspired by his relationship with his real-life daughter Corinne Foxx during her teenage years. And while the 27-year-old actress isn’t the one going toe to toe with her dad on screen, she is the one calling many of the shots behind the camera as a writer and executive producer on the comedy.

“I’ve been working with my dad for a while now, we obviously did ‘Beat Shazam’ together and we work on a lot of creative projects together. But this was definitely a different role for me because I wasn’t on the other side of the camera with him. I was behind the camera and actually kind of became his boss,” Corinne Foxx told TheWrap. “I am an EP on the show and I also wrote a few of the episodes. So I think our dynamic definitely changed because now I was calling the shots and it really allowed me to, I think, grow in my career.”

The “super personal” aspect of the eight-episode show, which launched Wednesday, involved Corinne Foxx’s “weird” experience casting a fictional version of herself named Sasha, a role that was filled by “perfect match” Kyla-Drew (pictured above with Jamie Foxx).

“We wanted someone who could really balance my dad out,” Corinne Foxx explained. “When we saw Kyla, she had this comfortability with him [and] she had this ability to also stand up to him. I found myself a lot in her.”

“Dad Stop Embarrassing Me” centers on Brian Dixon (Jamie Foxx), a successful business owner and bachelor, who just became a full-time father to his teenage daughter Sasha (Kyla-Drew). Determined to be the best father he can be, Brian’s going to need all the help he can get from his dad (David Alan Grier) and sister (Porscha Coleman) — and Sasha’s going to need all the help she can get learning how to deal with her new, lovingly chaotic family. 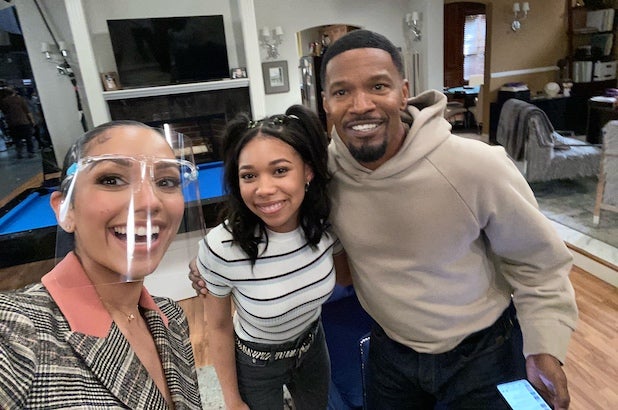 Corinne Foxx, Kyla-Drew and Jamie Foxx on the set of “Dad Stop Embarrassing Me”

“It’s loosely, but pretty closely, based on my life and my experience with my dad,” Corinne Foxx said. “We really wanted to highlight the father-daughter relationship that is so universal, in that fathers and daughters have a unique relationship. Especially in a daughter’s teenagehood, where a father wants to connect with his daughter, wants to understand her, has an age gap, a gender gap, and there’s so much conflict there — and the teenage daughter wants nothing to do with her dad in her teenagehood. We found that the show we really wanted to build off of was very similar to me and my dad’s relationship growing up. ‘Dad Stop Embarrassing Me,’ that really came from him just trying to connect with me and show up for me. It wasn’t always the right way and maybe he was too over the top or too overprotective, but it all came from a place of love.”

Corinne Foxx told TheWrap that it was important to her and her father that “Dad Stop Embarrassing Me,” which was filmed last summer, did not shy away from the realities of Black life in America, including the resurgence of Black Lives Matter protests and challenging on-screen depictions of Black fatherhood.

“I think the landscape has definitely changed,” Corinne Foxx said. “When I grew up, a lot of times when we saw Black fatherhood on screen, the dad was absent, he wasn’t there or was incarcerated. I feel like now, the landscape is changing, the narrative is changing, which is great, and we wanted to be a part of that. We think it’s so important to highlight my experience with Black fatherhood. My dad has been super present and has wanted to be a part of every aspect of my life — maybe too much, which is how we got the show.”

She added: “But I think it’s super important for representation in what a healthy Black family looks like. And even though they’re not perfect, they’re also, I feel like, so reflective of so many families across America. It was really important for us to hit on some of the social aspects of what was going on in society. We shot this over the summer, when the Black Lives Matter movement was really heightened. Even though we’re a comedy, we wanted to make sure that we were touching on what was going on and that we weren’t just ignoring the struggles and the fears of Black families, and that we were writing that into the show.”

“Dad Stop Embarrassing Me” Season 1 is streaming now on Netflix.