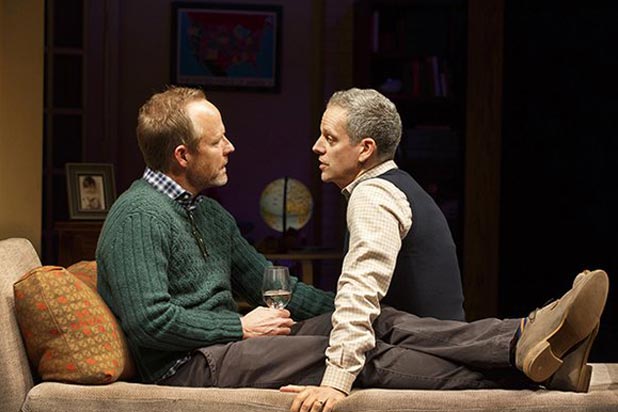 If you’re single without children and not young, and feel that your life is a major mistake, it’s recommended that you see Peter Parnell’s new play, “Dada Woof Papa Hot,” which opened Monday at LCT’s Off Broadway Mitzi E. Newhouse Theater. You will cherish your decision to be alone and childless.

Not only do the characters in Parnell’s play tell us what hard work it is to be in a committed relationship, they fully succeed in making it look like total drudgery.

And we haven’t even gotten to their kids! The three couples in “Dada Woof” have five children among them, as if they didn’t learn their lesson after the first one. If that sounds cynical, I got the idea from a character in “Dada Woof” who says that couples have a second child because the first attempt is always botched.

What makes “Dada Woof” novel as a play about marriage is that two of the three couples are same-sex. Even more unique, Parnell’s play might be the first to stir up married peoples’ talk about school drop-off schedules with whether the word “bottom” should stay a noun or also be a verb.

That kind of banter aside, the same-sex couples in “Dada Woof” are pretty much like the opposite-sex one (John Pankow and Kellie Overbey) until one of the gay fathers, Alan a.k.a. Papa (John Benjamin Hickey), begins to voice distress at how his 4-year-old daughter treats him. She much prefers the company of Rob a.k.a. Dada (Patrick Breen) because he’s her biological father, not Alan.

There are other problems in Alan and Rob’s marriage, especially when they meet another married-with-kids couple named Scott (Stephen Plunkett) and Jason (Alex Hurt), who lists in graphic detail what his husband allows him to do when getting it on with other guys.

Also Read: 'On Your Feet!' Broadway Review: Emilio and Gloria Estefan Pay Tribute to Their Own Success

Alan initially resists Jason’s advances, but clearly here are two daddies destined for each other. Whether or not he and Jason expand on Scott’s checklist of dos and don’ts is, unfortunately, played off stage.

On occasion, Alan can sound as if he’s reading from an article on commitment issues in the New York Times, where he works as a contributing writer.

But Parnell has a real ear for mixing up the new gay (family values) with the old gay (great, uninhibited sex), and placing Alan squarely between the two worlds.

Since Jason and Alan are the philandering fathers, they naturally emerge as the more intriguing characters, with Hurt and Hickey giving the far more dynamic performances.

But do the contented fathers, Rob and Scott, have to come off so ordinary? It’s a wonder Jason and Alan didn’t cheat sooner. Under the direction of Scott Ellis, actors Breen and Plunkett play their mostly happy characters as written, when what’s needed is for them to go beyond the stereotypes.

One’s an overly understanding shrink, the other’s a gay Republican (or rumored to be) on Wall Street, which is how Breen and Plunkett look, act, and are dressed, respectively. Casting against type might have supplied some needed frisson. Otherwise, “Dada Woof” is a play about a shrink and a Republican who not only married the wrong men but should have married each other. Which would have solved all their problems.

“Dada Woof” ends happily for two of the couples. To Parnell’s credit, he has made Alan far too complicated a character ever to settle for the life charted by his dull husband.