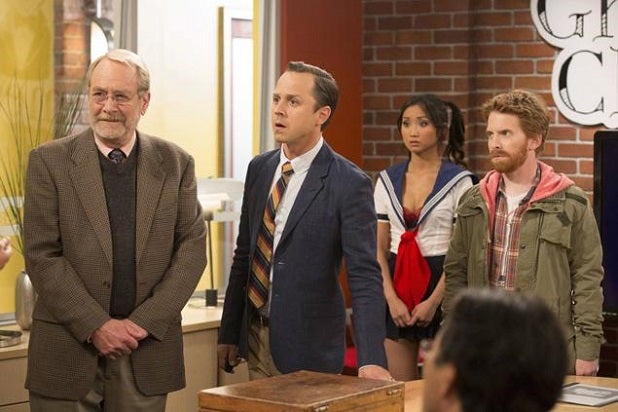 The two-part season finale of “Dads” airs Tuesday night on Fox — though the future of the shortened series is still very much up in the air.

“Dads” received its full season order back in October, but eventually the final three episodes were trimmed. Nothing has been announced on a potential subsequent run, but the Seth Green/Giovanni Ribisi vehicle has enjoyed somewhat of a modest resurgence as of late.

Fox is the only network not to cancel a new show this season. Betting people might label the Seth MacFarlane-executive produced sitcom as the frontrunner to break that trend. But the show’s more hands-on exec producers Alec Sulkin, Wellesley Wild and Mike Scully told TheWrap they are “confident, not cocky” that their multi-camera comedy will be back in some form.

“Dads” has averaged a 1.4 rating in the advertiser-coveted 18-49 demographic over the course of the season — though that number is typically inflated by the season premiere, which earned a 2.2 in the key demo. Beyond just being a standard debut episode, the September opener also benefitted from the virtue of Fox beginning its 2013-2014 season one week before the competition — a clever but unsustainable trick.

Following a more down-than-up season, over the past three weeks, “Dads” has earned a 1.5 rating and at least 3.7 million viewers for each episode. This, with little-to-no promotion — especially during Fox’s hot events, such as the Super Bowl, “American Idol” return or the World Series — which is not lost on the executive producers.

The “Dads” guys, who told TheWrap that they were “bummed” when Fox took their final three episodes away, admitted to some tension with their network. “We give them the business a little bit,” Wild said. “They had the Super Bowl, and when they did the Fox show montage … we weren’t even in the montage.”

Without much perceived help from the network, Sulkin attributes the recent ratings uptick to both a better written product on their end, and positive word of mouth from viewers. The comedy has also benefited from time now that the controversy surrounding its pilot episode has died down.

“It did have an impact on the launch of the show,” Sulkin said, speaking of the outcry from an Asian-American advocacy group that blasted the show for perpetuating Asian stereotypes. “I feel like once people throw the term ‘racism’ around … it becomes very hard to disagree with that person.”

The executive producers believe such groupthink harmed the program’s early returns. “Oh this show is bad because someone told me it was bad to begin with,” Sulkin said, summing up the attitudes of potential viewers.

The guys are keenly aware that the two-part finale is what they will be judged on. Therefore, they’re using it as an emotional appeal to both viewers and the network to stay on the airwaves — but that does not mean the episodes will abandon crass humor. “You still get your finger in the butt, but you also get heart,” Wild summed up.

If the comedy does not come back, the exec producers will be upset, but otherwise fine. Sulkin and Wild are contractually obligated to go back to “Family Guy,” Scully is still with “The Simpsons.”

See video: Seth MacFarlane’s ‘A Million Ways to Die in the West’ Trailer Has Death and Blood Aplenty

But if God (or in this case  Fox’s entertainment chief Kevin Reilly) does grant “Dads” a second chance, loyal fans can expect a romantic storyline brewing between Green and Song’s characters. As Wild puts it, the goal is to turn the two into a “Sam and Diane or Ross and Rachel.” Though he quickly added: “With one-thirtieth [of] the audience.”