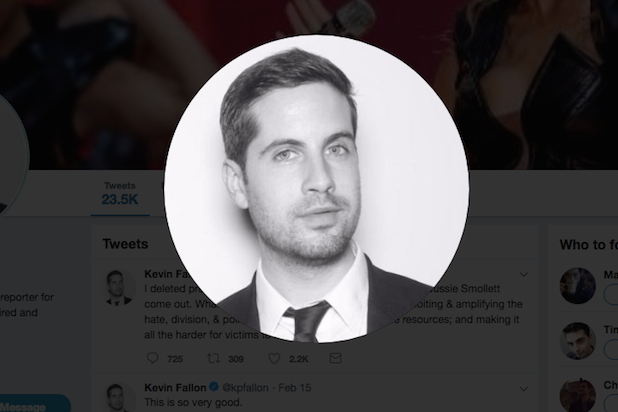 “I deleted previous inaccurate tweets as more reports about Jussie Smollett come out,” Fallon said late Monday evening. “What a despicable act if updates are true: exploiting & amplifying the hate, division, & politicization; abusing media & police resources; and making it all the harder for victims to report.”

Also Read: BuzzFeed Editor: 'All I Want For Christmas Is Full Communism Now'

“People in MAGA hats recognized and then beat and poured bleach on Jussie Smollett, calling him that ‘faggot’ from Empire,”  Fallon said in his tweet. “Anyone who thinks supporting You Know Who isn’t tantamount to providing artillery for weaponized bigotry needs to take a hard look in the mirror.”

Also removed was another tweet: “Update after learning more: they wore ski masks, so as to cowardly not be recognized as they shouted ‘this is MAGA country’ and toed [sic] a rope around his neck like a noose.”

The two deleted tweets remained live long after Chicago authorities began to challenge Smollett’s account that two men in Chicago attacked and beat him while shouting “this is MAGA country” and racial and anti-gay epithets.

On Monday, CNN reported that its sources within the Chicago PD said that the “Empire” star staged the attack with two men whom he paid for the job. Two brothers, Ola and Abel Osundairo, were initially detained as persons’s of interest in the case before ultimately being released. The same CNN report also said the brothers were now offering full cooperation with the police.

Daily Beast Editor-in-Chief Noah Shachtman declined to comment on the matter. Fallon and reps for the Daily Beast’s parent company, IAC, did not immediately respond to request for comment.

Fallon was far from alone among journalists who have commented on the Smollett story based on unconfirmed news reports and unfounded speculation. On the day Smollett first reported an attack to authorities, GQ writer Joshua Rivera called out the Chicago PD for calling the matter a “possible” hate crime — saying the cautious language was a further attack on Smollett.

“The cautious wording is one last wound inflicted on Smollett’s battered body, a careful hedging of bets that don’t need hedging,” he wrote.

Also Read: BuzzFeed News Employees to Form Union Following Layoffs: 'It's Not All Fun and Memes'

A rep for the police did not immediately respond to request for comment from TheWrap about whether there had been any new developments in the case Tuesday morning, but in an earlier statement, Chicago Police Department chief communications officer Anthony Guglielmi said that “the information received from the individuals questioned by police earlier in the Empire case has in fact shifted the trajectory of the investigation.”

Even as evidence has mounted against Smollett’s version of events, the star has continued to stand by his story.

“He has now been further victimized by claims attributed to these alleged perpetrators that Jussie played a role in his own attack,” lawyers representing the actor said in a statement over the weekend. “Nothing is further from the truth and anyone claiming otherwise is lying.”

Smollett’s “Empire” showrunner Brett Mahoney also continued to stand by the star, tweeting on Monday that he still believed the embattled actor.