The Daily Mail Online has sued Gawker for defamation claiming damages to its “reputation, goodwill, and business.”

The lawsuit is based upon a takedown piece written by former Daily Mail freelancer James King for Gawker in March. In it, King wrote: “The Mail’s editorial model depends on little more than dishonesty, theft of copyrighted material, and sensationalism so absurd that it crosses into fabrication.”

King, who worked for the media company from 2013-2014, depicted a website that doesn’t practice proper attribution or fact checking. Daily Mail, which averages around 23 million monthly readers, is a site “ripping off the web,” King wrote.

Also Read: Gawker Blasts Hulk Hogan After N-Word Apology: 'Finally Been Exposed as the Hypocrite He Is'

“We were simply given stories written by other publications and essentially told to rewrite them,” writes King. “And unlike at other publications where aggregation writers are encouraged to find a unique angle or to add some information missing from an original report, the way to make a story your own at the Mail is to pass off someone else’s work as your own.” 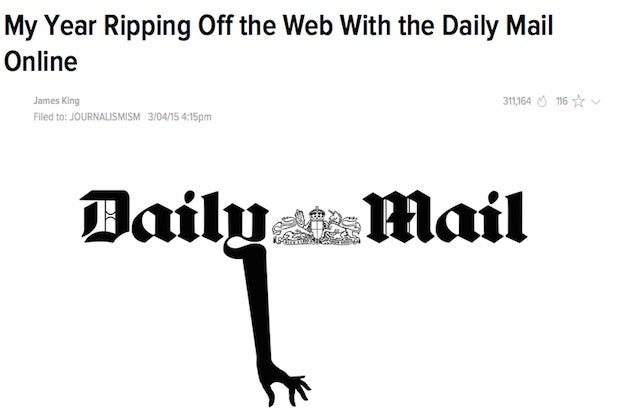 Gawker is brushing the suit aside, telling TheWrap: “While we’re not surprised that the Daily Mail doesn’t like what James King had to say about his time working there, this baseless complaint doesn’t even attempt to refute the vast majority of the author’s detailed anecdotes about his experience as Daily Mail writer.”

The Daily Mail’s lawsuit adds to the rebel digital site’s legal bills. They go to court in early 2016 against wrestling icon Hulk Hogan, who has sued for $100 million over a sex tape the website released featuring him.