“The Daily Show” hasn’t changed much since Donald Trump took office. It’s the same political commentary we’ve been seeing since the late ’90s. It’s a bit more scathing — appropriate considering the material they have to work with — but besides a new host in Trevor Noah taking over from Jon Stewart and a batch of fresh correspondents, “The Daily Show” is still the same fake journalism we’ve come to rely on.

It’s everybody else that’s changed around them. Since Trump took office in January, late-night television has attempted to step up to “The Daily Show’s” level — but over on Comedy Central, it’s business as usual. Their job, as it has always been, “is to find the funny” and to “find the bulls—,” correspondent Jordan Klepper said at Comedy Central’s L.A. Press Day at the Viacom Building on Wednesday.

The new administration has been a boon for “The Daily Show.” The program with Noah at the helm just had one of its best weeks ever — and that included its premiere week — after Trump fired FBI Director James Comey.

It’s also been somewhat of a blessing for its late-night competitors. Stephen Colbert was playing the politics game on Comedy Central long before he was on CBS, but on “The Late Show,” he’s resurrected his former ultra-Republican persona multiple times. Other “Daily Show” alums Samantha Bee and John Oliver, along with comedians like Seth Meyers, have brought their unique perspectives and brand of humor to their own programs.

In other areas, shows like “The View” have tackled the latest headlines and commented on the Trump administration.

Talking with Minhaj, Noah and fellow correspondent Jordan Klepper, all didn’t seem to mind the increased competition. As Noah explained, each late-night program has its own specialties. For example, while Colbert may mention politics, “The Daily Show” is strictly political.

“I think there’s a distinction between them saying something about politics and them becoming political,” Noah said. “I don’t think [James] Corden sees himself as political at all … but when you have a President who is as pervasive as Donald Trump is, everyone’s going to speak about them.”

Klepper added that “The Daily Show’s” strengths deal with going into specifics about the Trump administration, instead of just regurgitating headlines. The heightened interest in politics by a general audience has made it easier for them.

“It’s the world’s greatest reality show — and we are all watching,” he said.

There’s also the importance of the angle, which Minhaj said has become more important to him as his tenure at the show continues.

“Whoever has the best take is what matters,” he explained. “My challenge is finding the best take, and it’ll always be that.” 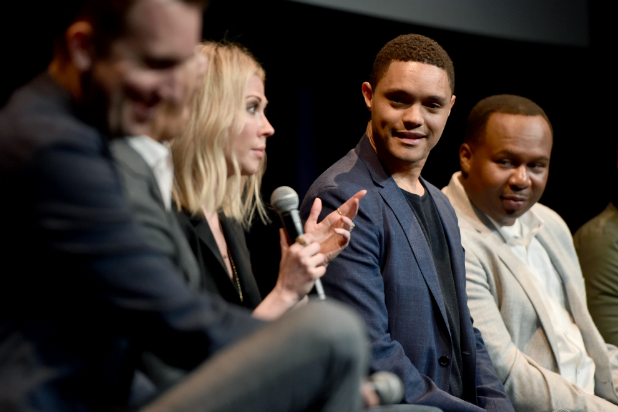 There’s a lot of material to work with, thanks to a news cycle that generates what amounts to Onion headlines nearly every day. “The Daily Show” is already a comedy show, but now it has to deal with a presidency that is in itself a comedy show. How do you report on people who already seem like jokes? By expanding on the joke.

“I enjoy it,” Noah said. “I use it as the propellant for the rest of the headline. If Donald Trump gives you the joke, then you get to spend more time on the policy.”

Take, for instance, a 2015 bit where Noah compares Trump to the kings of Africa. This was before Trump became the Republican nominee, but in the seven-and-a-half-minute long segment, Noah — who is from South Africa — breaks down the similarities between the then-future President and figureheads he was used to, such as the President of South Africa Jacob Zuma.

Each of the correspondents seeks to bring their own unique perspective to the stories they cover. Minhaj comes at it as a Muslim and the son of Indian immigrants. Klepper — who is white and lives in Brooklyn — tries to utilize his privilege to bring focus on to certain issues.

“That white fragility that is out there sometimes, I like to play that and show it,” he said.

The Trump administration has certainly become a primary focus of the show, but correspondents often try to touch upon other issues. Klepper, for example, is really into gun control while Minhaj touches upon immigration.

But this has created a show that now, more than ever, is faced with a mounting pressure to do the work of journalists and to simultaneously highlight the good (and bad) work of the media.

“The Daily Show” in the Noah age is continuing the tradition of being a one-stop source for news. Research published by the Public Religion Resource Institute in 2015 showed that one in 10 millennials (ages 18-29) trusted Stewart and Colbert to be their source to learn about current events.

In an Ohio State University study published in January, researchers found that satirical news shows like “The Daily Show” have an impact on viewers, reinforcing previous ideological beliefs and allowing those not usually interested in politics to take part.

“These results suggest that satirical news can engage people who otherwise would avoid political news,” said study author  Silvia Knobloch-Westerwick. “Satirical news could be a gateway into more serious news use for people who aren’t currently engaged in politics.”

During his stint hosting the White House Correspondent’s Dinner, Minhaj sought to address the plight of journalists in the “golden age of lying,” as he called it. He relegated to his audience of journalists and news anchors that it concerns an issue of trust.

“Even when the press is telling the truth a lot of people don’t trust MSM — the mainstream media,” he continued, adding that in his monologue, he wanted to add, but didn’t get to, that “the truth is still the truth.”

It’s why “The Daily Show” continues to call out a media organization when it slips up or does something questionable. It’s not to put attention on themselves, but to hopefully try and fix something.

“We should listen to the jester pointing at the flaws of the king, but the king still holds institutional power and I don’t,” Minhaj said.

All three correspondents touted the work of journalists in the Trump age and cautioned the audience against only relying on “The Daily Show” for a day’s worth of news.

“I rely on journalists to do my show,” Noah said. “I don’t see myself as a journalist because journalists put in hard work … If anything we are comedians who work in the face of news and politics.”

But in the end, “The Daily Show” — with or without Trump — is still “The Daily Show.” It’ll still be in the industry of comedy and it’ll attempt to highlight the ups and downs of politics and media.