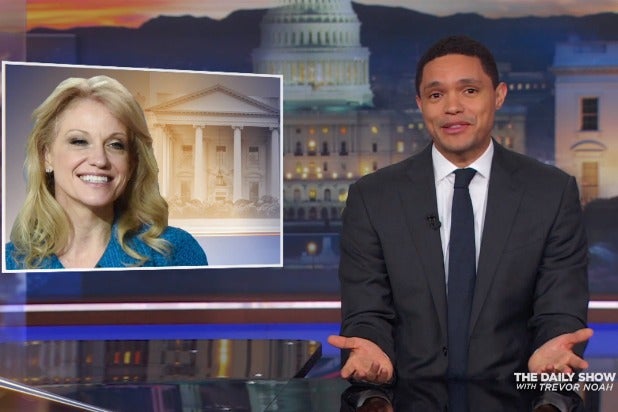 On the same day counselor to the president Kellyanne Conway suggested “anti-religious” late-night comedians fostered an environment that paved the way for the Pittsburgh synagogue shooting that left 11 dead, one late-night show fired back.

The official Twitter account for “The Daily Show With Trevor Noah” asked Conway: “If late night shows are so anti-religious, why did God create TEN THOUSAND of them?” The tweet from the Comedy Central show included an image of a few dozens hosts of late night TV… and a dog.

Hey @KellyannePolls, if late night shows are so anti-religious, why did God create TEN THOUSAND of them? pic.twitter.com/1kJsxOHIjQ

Several other notable figures of late night did not weigh in on the matter on Twitter as of the writing of this post.

“The anti-religiosity in this country that is somehow in vogue and funny to make fun of anybody of faith, to constantly be making fun of people that express religion — the late-night comedians, the unfunny people on TV shows — it’s always anti-religious,” Conway said during a Monday appearance on Fox News. She did not name any particular hosts.

“These people were gunned down in their place of worship, as were the people in South Carolina several years ago,” Conway continued, referencing the nine people killed at a Charleston church in 2015. “And they were there because they’re people of faith, and it’s that faith that needs to bring us together.”

Conway added: “This is no time to be driving God out of the public square.”

You can watch the clip here:

Kellyanne Conway suggests that “the late-night comedians” and “the unfunny people on TV shows” are responsible for the deadliest anti-Semitic massacre in American history. pic.twitter.com/h4n86dpSs4

Conway’s statement comes after 11 people were killed on Saturday at the Tree of Life Synagogue in Pittsburgh, Pennsylvania. The FBI is investigating the attack as a hate crime after the suspect, Robert Bowers, had routinely posted anti-Jewish comments and memes on his social media accounts. Bowers was a vocal critic of President Trump online, believing the president was controlled by Jewish special interest groups.

“This was an anti-Semitic act,” Trump said in a speech on Saturday afternoon. “You wouldn’t think this would be possible.”

The Anti-Defamation League called it the “deadliest attack” on Jews in the history of the United States.