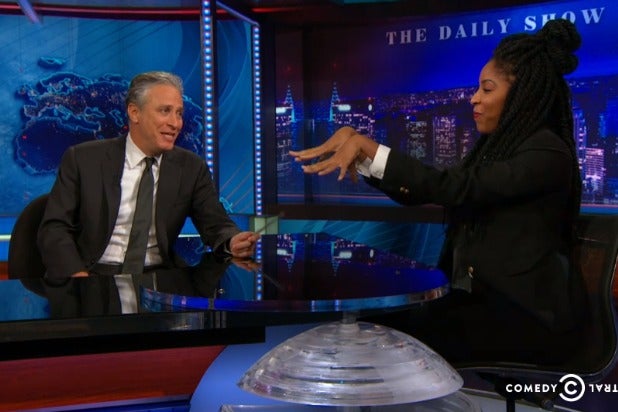 Jessica Williams is not replacing Jon Stewart as the host of “The Daily Show.”

The 25-year-old comedian, currently a correspondent on the Comedy Central fake news program, took to Twitter on Sunday to dispel any rumors that she would be getting a promotion in wake of Stewart’s decision to step down as anchor.

“Fact 1: I’m not hosting. Thank you but I am extremely under-qualified for the job,” Williams wrote. “I am super not right for it, but there are quite a few people who are! Can’t wait to stick around & see what happens.”

Her statement came days after she was named by several major media outlets, including BBC and Time, as a suitable Stewart successor, and featured in a “Hot Tub Time Machine 2” TV spot as the host in 2025.

“It’s not sad. There is strength in this. so don’t make me your pity party or a platform. This is for me. And that’s my feminism,” Williams tweeted. “I will say I’m under-qualified for that because I know what the job takes. And at 25 I am. My worth is not tied to being a host.  you’re tying my worth to that fact. I am not.”

Here are Williams’ tweets addressing her future on “The Daily Show”:

Fact 1: I’m not hosting. Thank you but I am extremely under-qualified for the job!

At this age (25) if something happens politically that I don’t agree with, I need to go to my room & like not come out for, like, 7 days.

That being said I am super not right for it, but there are quite a few people who are! Can’t wait to stick around & see what happens.