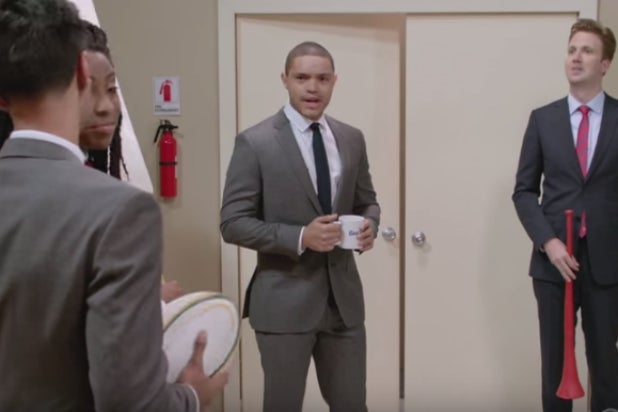 “Daily Show” host Trevor Noah previewed who his media targets might be, as well as what he thinks of the Donald Trump “spectacle,” during a breakfast in front of a small group of reporters on Friday.

“Donald Trump is an interesting one, because the truth of the matter is he doesn’t say much, and really what we’re doing is enjoying the spectacle of it all,” Noah said at the event TheWrap attended. “That’s really what we’re doing: we’re indulging in it. At some point our indulgence may come back to bite us.”

Other than Trump, will Noah go after the rest of the GOP like his predecessor Jon Stewart did with glee?

“I don’t have targets yet, which I think is the right way to approach it,” he continued. “I wouldn’t want to come in saying, ‘This is my target.'”

Although he praised Rand Paul a few times, the comedian from South Africa noted that he’s been warned not to get too excited about any Republican candidates, because the GOP will eventually break his heart. He is interested in Ben Carson — the GOP candidate popular in polls behind Trump — and hinted at a desire to interview him.

“I feel like that would be a very energetic interview,” Noah said dryly.

Also Read: 'Daily Show With Trevor Noah' Premiere to Be Simulcast Across All Viacom Networks

And what about another one of his predecessor’s favorite talking points?

“I didn’t have Fox News in most places of the world, where I was living, where I was traveling, so these are new people for me,” Noah said. “I get to forge my own relationships. I get to discover the person that I will grow to loathe and hate — and it might not be on Fox News. And that’s the exciting thing. I’m not coming in with any preconceived notions.”

He’s keeping an open mind because he doesn’t want his satirical vision to be hindered by “blinders.”

“If you go: ‘I have a target’ — then you have blinders on,” the comedian explained. “Sometimes you’re gonna be so focused on that target that you don’t get to get to where you should be getting to — and that’s the truth of what is happening.”

“I hope I don’t have [them] for a while, because then I get to have more fun with a wider array of targets,” Noah added.