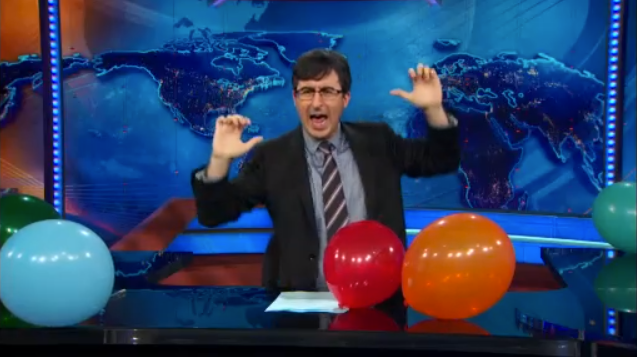 John Oliver was thrilled to report on Thursday's "Daily Show" that five years after the economic collapse, the justice system appeared to finally be going after the big banks that largely caused it. He played a clip from "The Situation Room" of the announcement that the United States government is suing the Bank of America.

"Yes! Accountability! We got it, baby!" he cried, as balloons rained down upon the set and "Celebrate Good Times" played on the speakers.

He continued the CNN clip, only to find out that the lawsuit was civil, not criminal, "so no one's going to jail."

With some effort, Oliver popped one of the celebratory balloons. And his celebratory doves committed suicide, leaving a note saying that they were furious about the lack of Wall Street accountability.

Oliver then played clips from all the other lawsuits against big banks resulting from the economic collapse, all of which ended in settlements in which the banks did not admit to any wrongdoing and fines that amounted to very little of the bank's revenue.