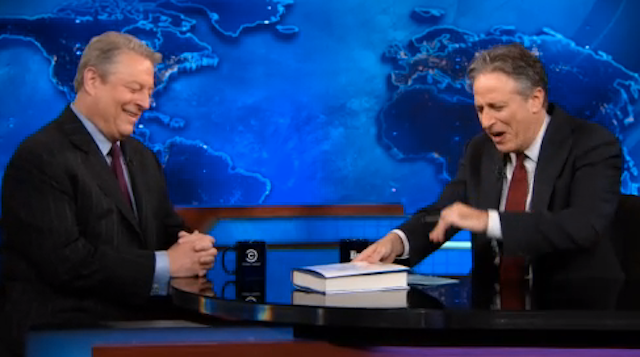 Jon Stewart questioned former vice president Al Gore about his sale of Current TV to Al Jazeera on Wednesday night, saying it was strange for an environmental activist to divest his liberal media outlet to a network "backed by fossil fuel money."

Gore, on the show to promote his new book, "The Future," defended the deal, using a familiar buzzword by saying it was "sustainable."

"Can mogul Al Gore who has Current TV and sells it to Qatar, which is an oil-based economy, can mogul Al Gore coexist with activist Al Gore?” Stewart asked. “If you couldn’t find for your business a more sustainable choice to sell to—"

Gore interrupted: “I think it is sustainable. What is not sustainable about it?"

“I mean, a non-fossil fuel based buyer,” Stewart said

Gore praised Al Jazeera for offering "the highest quality, most extensive, best climate coverage of any network" and said Current TV's ability to compete was limited in a "conglomerate world" without "deep pockets."

“You had an opportunity to make a statement probably about your principles and some people would feel, and for me as well, I thought it was an odd move,” Stewart said. “Not because of some of the other things, but because it is backed by fossil fuel money.”

But Gore dismissed the criticism.

“Can you see how people at home might think — but he's asking me in my life to make choices about light bulbs and a cost-benefit analysis for the purpose of sustainability when I just want to see my book," Stewart responded. "That's the issue."

Al Jazeera's political leanings have been questioned because it is backed by the oil-rich Qatari royal family, which Stewart noted.

But Gore said the country is a "strong ally" of the United States, and pointed to its plans to build solar and wind power sources in the region.

“I'm very, very comfortable with it,” Gore said. “I completely get the criticism, but this was a good choice and the net benefit for the U.S. is going to be very positive.”