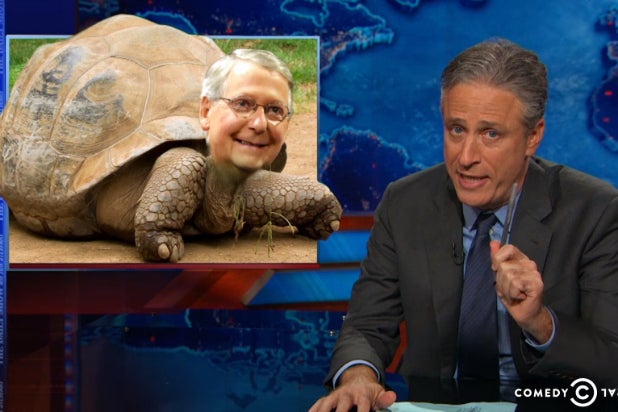 Jon Stewart spent some time talking liberals off the ledge on Thursday’s “Daily Show,” following an Election Day drubbing by the GOP.

“Tuesday night, the Democrats got taken out back and ‘Old Yellered’ by the American elector,” Stewart put it.

Also read: ‘The Daily Show’ Has White People Explain Why Latinos Are So Damn Terrifying (Video)

The Comedy Central host then spent some time touting the virtue of context, a setup that would pay off later in the below 8-minute-plus bit. He then turned his focus to making fun of Sen. Mitch McConnell — again.

“There’s actually been a little bit of controversy that we’ve been likening the presumptive Senate majority leader Mitch McConnell to a slow-talking tortoise-man. I want to state for the record: We are not,” Stewart said. “What we are doing, is asserting that Mitch McConnell is, literally, biologically, a tortoise.”

Stewart continued: “Specifically, a 180-year-old living, breathing giant tortoise of the species aldabrachelys gigantea, who has, despite not being indigenous to North America, somehow ascended to a prominent leadership role in the United States Senate.”

The biggest contextual payoff was saved for the end, when Stewart pointed out the comparison McConnell drew between his icy relationship with President Obama and the one Ronald Reagan shared with Mikhail Gorbachev during the Cold War.