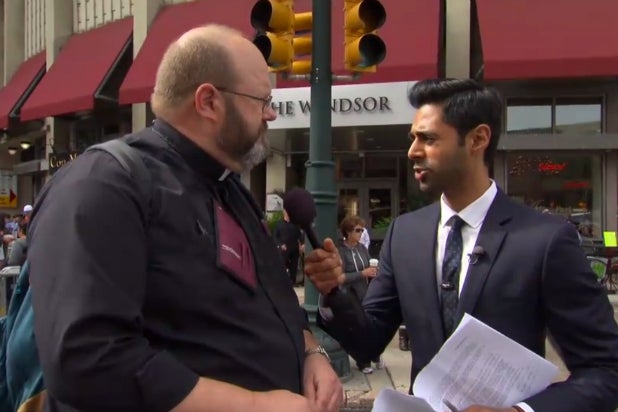 “The Daily Show With Trevor Noah” correspondent Hasan Minhaj is all about Pope Francis in a new bonus segment released by the Comedy Central show Monday night.

“Pope Francis dropped in on the U-S-of-A and showed us that he’s way more than just a mouthpiece for G-O-D,” Minhaj said in the clip, which then cut to multiple real news correspondents breathlessly describing the pope as “a rock star.”

Minhaj then checked in on the pope’s mass in Philadelphia last weekend.

“It was Pope-demonium!” he declared.

Trevor Noah made his debut as the new host of “The Daily Show” Monday night. Comedy Central released the digital-only segment shortly after the end of the East Coast telecast of the premiere.

Releasing a fully produced correspondent segment as a digital exclusive wasn’t something that “The Daily Show” did regularly when Noah’s predecessor, Jon Stewart, hosted the show.

Doing so now would appear to be in line with Comedy Central’s stated desire to have the show be more reflective of the digital news cycle.

“When the show was created, it was reflective of a 24-hour news cycle,” Comedy Central president Michele Ganeless told TheWrap this summer, prior to Noah’s debut as host. “Now we and the show want to reflect the news cycle as it exists today. You can’t do that with just a half-hour show or repurposing the stuff we do at night to other platforms.”