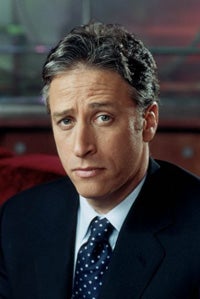 Jezebel, Gawker’s ladyblog, recently posted an item penned by Irin Carmon about the hiring of Olivia Munn by “The Daily Show.” In it, Carmon argued that Munn — the first new female correspondent on the show in more than seven years — lacked the résumé to be hired. (Munn, host of G4’s “Attack of the Show,” is "better known for suggestively putting things in her mouth on a video game show and being on the covers of Playboy and Maxim than for her comedic chops.")

“With the notable exception of Samantha Bee, who's been on since 2001, female correspondents have been a short-lived phenomenon,” Carmon wrote. “As fiercely liberal and sharp-eyed an observer as Jon Stewart can be, getting women on the air may be his major blind spot.”

The post has generated nearly 100,000 page views and 1,000 comments – even prompting a response from Stewart himself (“Jezebel thinks I’m a sexist prick!”) on air. (And prompting criticism from a former Gawker blogger Emily Gould, who called the post a thinly-veiled feminist-stirring stunt to attract pageviews.)

Now, the women who work on “The Daily Show” are firing back.

In a letter signed by 31 women — including Munn and Bee — they write: “The Daily Show isn't a place where women quietly suffer on the sidelines as barely tolerated tokens. On the contrary: just like the men here, we're indispensable. We generate a significant portion of the show's creative content and the fact is, it wouldn't be the show that you love without us.”

Recently, certain media outlets have attempted to tell us what it’s like to be a woman at The Daily Show with Jon Stewart. We must admit it is entertaining to be the subjects of such a vivid and dramatic narrative. However, while rampant sexism at a well-respected show makes for a great story, we want to make something very clear: the place you may have read about is not our office.
The Daily Show isn't a place where women quietly suffer on the sidelines as barely tolerated tokens. On the contrary: just like the men here, we're indispensable. We generate a significant portion of the show's creative content and the fact is, it wouldn't be the show that you love without us.

So, who are the women of The Daily Show?

If you think the only women who help create this show are a couple of female writers and correspondents, you're dismissing the vast majority of us. Actually, we make up 40% of the staff, and we're not all shoved into the party-planning department (although we do run that, and we throw some kick-ass parties). We are co-executive producers, supervising producers, senior producers, segment producers, coordinating field producers, associate producers, editors, writers, correspondents, talent coordinators, production coordinators, researchers, makeup artists, the entire accounting and audience departments, production assistants, crew members, and much more. We were each hired because of our creative ability, our intelligence, and above all, our ability to work our asses off to make a great show.

Is it hard to work at The Daily Show?

Absolutely. When it comes to what makes it onto the show, competing ideas aren't just hashed out between the faces you see on camera or the names that roll under the "writers" credits. Jokes and concepts come from our studio department, our field department, our graphics department, our production department, our intern department, and our control room. Jon's rule is: the strongest idea and the funniest joke win every single time, no matter who pitches it–woman or man, executive producer or production assistant. And of course none of these jokes and ideas would get to air without the layers of production talent working behind the scenes. The fairness of our workplace makes competition tough and makes the show better.

So if it's so challenging, why have we stayed for two, five, ten, fifteen years? Because it's challenging. We feel lucky to work in a meritocracy where someone with talent can join us as an intern and work her way up to wherever her strengths take her. But also because it's an environment that supports our being more than just our jobs. The Daily Show (to an extent few of us have seen elsewhere) allows us the flexibility to care for our families, pursue our own projects, cope with unexpected crises, and have lives outside the show.

Also… are you kidding? It’s The Daily Show for Christ's sake. You ask some stupid questions, imaginary interlocutor.

Jon’s not just a guy in a suit reading a prompter. His voice and vision shape every aspect of the show from concept to execution. The idea that he would risk compromising his show’s quality by hiring or firing someone based on anything but ability, or by booking guests based on anything but subject matter, is simply ludicrous.

But what’s he really like? Well, for a sexist prick, he can be quite charming. He's also generous, humble, genuine, compassionate, fair, supportive, exacting, stubborn, goofy, hands-on, driven, occasionally infuriating, ethical, down-to-earth and–a lot of people don't know this–surprisingly funny (for a guy brimming with “joyless rage”). How else to describe him? What's the word that means the opposite of sexist? That one.

In any organization, the tone is set from the top. Since taking over the show, Jon has worked hard to create an environment where people feel respected and valued regardless of their gender or position. If that’s not your scene, you probably wouldn’t like it here. We happen to love it.

And so, while it may cause a big stir to seize on the bitter rantings of ex-employees and ignore what current staff say about working at The Daily Show, it's not fair. It's not fair to us, it's not fair to Jon, it's not fair to our wonderful male colleagues, and it's especially not fair to the young women who want to have a career in comedy but are scared they may get swallowed up in what people label as a "boy's club."

The truth is, when it comes down to it, The Daily Show isn't a boy's club or a girl's club, it's a family – a highly functioning if sometimes dysfunctional family. And we're not thinking about how to maximize our gender roles in the workplace on a daily basis. We're thinking about how to punch up a joke about Glenn Beck's latest diatribe, where to find a Michael Steele puppet on an hour's notice, which chocolate looks most like an oil spill, and how to get a gospel choir to sing the immortal words, "Go f@#k yourself!"

PS. Thanks for the list of funny women. Our Nanas send us a ton of suggestions about "what would make a great skit for The John Daley Show." We'll file it right next to those.

PPS. Thanks to the male writers who penned this for us.