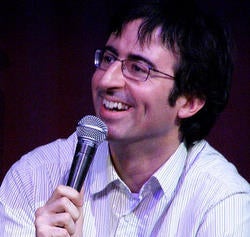 The hourlong series, “John Oliver’s New York Stand-Up Show,” is produced by Avalon Television and will premiere Jan. 8 at 11 p.m.

Each episode will kick off with a brief comedy performance by the popular U.K. native, then lead into stand-up routines by comedians including Paul F. Tompkins, Janeane Garofalo, Marc Maron, Brian Posehn, Kristen Schaal and Eugene Mirman.

“It’s the most worthwhile way you could spend an hour each week that doesn’t involve getting Mount Rushmore gradually tattooed across your stomach,” Oliver noted in a statement.

In addition to his regular “Daily Show” gig, Oliver has appeared in three episodes this season of the new NBC series “Community.”