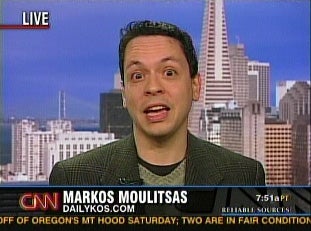 I recently wrote a fairly extensive feature (“Politics Still Raging on the Web”) looking at the post-election performance of left-leaning political websites — particularly those that came into existence or prominence during the Bush White House — to see what, if any, effect the election of Barack Obama had on their businesses.

I was looking for evidence of a letdown, but – surprising to me, anyway – did not find one. Traffic, engagement, and interest are all way up, post-inauguration. (Advertising, though, does not appear to be, as none of the people I interviewed would disclose theirs.)

One of them, DailyKos founder Markos Moulitsas, declined a phone interview, opting to answer my questions via e-mail. His answers came in too late to be included in the piece, but I figured I’d post them here.

At least he didn’t gloss over the advertising slump.

How is the site doing since the election/inauguration? It appears there was a dip in traffic, but then a post-inauguration bounce — why is that the case?


People took a break after a long and grueling election season, but have reengaged to fight the important legislative battles currently being fought in Congress. Elections are only the first step in the long process of remaking our country in a more progressive direction.

Brutal. Everyone is hurting.

What were your goals when you started? And did a finish line like the 2008 election ever cross your mind?

I started the site in 2002. There were no goals. Just a place to get things off my chest. The biggest "blogs" had visitor numbers in the hundreds per day. No one thought blogs would evolve into major media outlets.

From your vantagepoint, has there been a letdown/dropoff among politcal websites that came into existence/prominence during the Bush White House?

None. As my numbers show, traffic is up. It’s not as if Republicans and corporatist Democrats lay down their arms and surrendered.

What role does Netroots Nation play in your overall business? Does it keep you somewhat insulated from traffic/web advertising slumps?

Netroots Nation is an annual meetspace celebration of our movement. It has zero bearing whatsoever on our business. It has never been a part of Daily Kos or Kos Media, despite it having grown out of the Daily Kos community. It’s a separate organization.