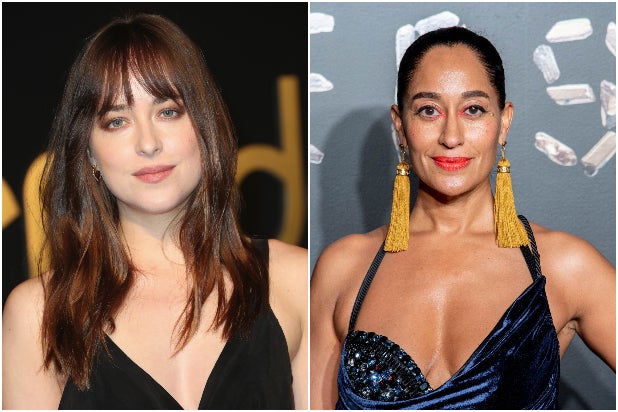 Dakota Johnson and Tracee Ellis Ross are set to star in “Covers,” the next film from the director of “Late Night,” Nisha Ganatra, Focus Features chairman Peter Kujawski announced Monday.

Focus is partnering with Working Title Films on the comedy that is set within Hollywood’s music scene.

Ganatra is directing with a screenplay written by Flora Greeson. Working Title’s Tim Bevan and Eric Fellner will produce with Alexandra Loewy serving as executive producer. Focus Features will distribute the film in the U.S., and Universal Pictures International will distribute internationally.

“Together Dakota and Tracee are an undeniable force of comedic talent, and along with our friends at Working Title and our director Nisha, we can’t wait to see them go head to head on this new project,” Kujawski said in a statement.

Johnson most recently starred in Luca Guadagnino’s “Suspiria” and “A Bigger Splash.” She’ll next be seen in “The Peanut Butter Falcon” opposite Shia LaBeouf, as well as “The Friend.” Ross currently stars on “black-ish.”