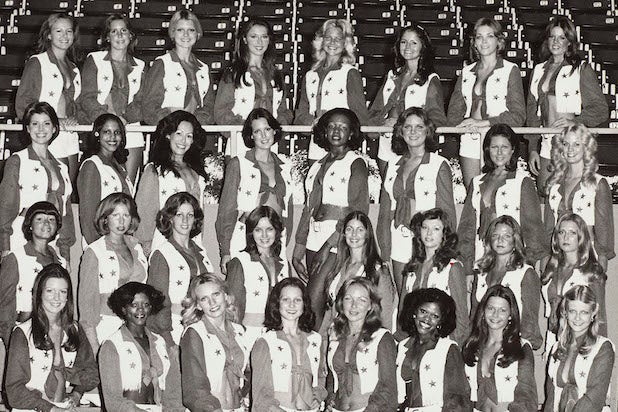 Starz announced on Thursday that it has acquired four new documentaries, including “Daughters of the Sexual Revolution,” about a controversy surrounding the Dallas Cowboys cheerleaders, and the Oscar-shortlisted documentary feature “Of Fathers and Sons.”

“Daughters of the Sexual Revolution: The Untold Story of the Dallas Cowboys Cheerleaders,” is a behind-the-scenes story of how the original Dallas Cowboys Cheerleaders became a controversial pop culture phenomenon at the height of the sexual revolution. The documentary originally premiered at the SXSW film festival in 2018, and it will be available for download or streaming via the STARZ app on Jan. 14. at 9 p.m. ET/PT.

“Of Fathers and Sons” won the Grand Jury Prize for World Cinema Documentary at Sundance in 2018, and it is now on the Oscar shortlist for Best Documentary Feature. It’s about a man who gains the trust of a radical Islamist family and follows them over the course of two years. It will air on Starz on March 11.

Starz also acquired “Inside My Heart” and “Antonio Lopez: 1970: Sex, Fashion & Disco,” which will premiere March 4 and in May, respectively. Finally, Starz also set release dates for two other recent documentary pickups, “Scotty and the Secret History of Hollywood,” which airs Feb. 11, and “White Boy,” which airs April 8.

See the full list of premiere dates and synopses for the documentaries via Starz below:

“Daughters of the Sexual Revolution: The Untold Story of the Dallas Cowboys Cheerleaders” – January 14, 2019

Daughters of the Sexual Revolution is the never-before-told story of Suzanne Mitchell, the fiercely loyal den mother of the original Dallas Cowboys Cheerleaders. Seen by many as regressive and exploitative, this diverse sisterhood of small-town “girls next door” became a controversial pop culture phenomenon at the height of the Sexual Revolution, changing the game of football – and America – forever. Directed by Dana Adam Shapiro.

Scotty and the Secret History of Hollywood is the deliciously scandalous story of Scotty Bowers, a handsome ex-Marine who landed in Hollywood after the Second World War and became confidant, aide-de-camp and lover to many of Hollywood’s greatest male – and female – stars. An unsung Hollywood legend, Bowers would cater to the sexual appetites of celebrities – straight, gay and omnivorous — for decades. In 2012, he finally spilled his secrets in the bestselling memoir Full Service, which revealed a dramatic counter-narrative about Hollywood’s Golden Age. GALECA: The Society of LGBTQ Entertainment Critics recently named Scotty and the Secret History of Hollywood a nominee for “LGBTQ Documentary of the Year” for its 10th Annual Dorian Awards.

At the peak of the refugee and migrant crisis, three families are forced to flee war-torn Syria and Afghanistan, seeking safe harbor on foreign shores. In the wake of witnessing unthinkable atrocities and having the lives they’ve known wrested away, these people – mothers, fathers, sons and daughters – exhibit remarkable resilience as they fight for survival. Inside My Heart allows us to witness the families’ struggles and frustrations over the course of three years and better understand the hopes they have for their children. Ultimately, it serves as a vital reminder about the human beings who have been swept up in a global crisis that involves 68 million refugees and represents the largest human exodus since the Second World War.  Directed by Debra Kellner and produced by Lionsgate founder Frank Giustra.

After his Sundance award-winning documentary The Return to Homs, Talal Derki returned to his homeland where he gained the trust of a radical Islamist family, sharing their daily life for more than two years. His camera focuses mainly on the children, providing an extremely rare insight into what it means to grow up with a father whose only dream is to establish an Islamic Caliphate. Thirteen-year-old Osama and his 12-year-old brother Ayman are in the center of the story. They both love and admire their father and obey his words, but while Osama seems to follow the path of Jihad, Ayman wants to go back to school. The film captures the moment when the children have to let go of their youth and are finally turned into Jihadi fighters. No matter how close the war comes–one thing they have already learned: they must not cry. Of Fathers and Sons transports viewers behind “enemy” lines for a rare glimpse of a world that seems exotic and threatening. Foreign language.

White Boy is based on the story of 17-year-old Richard Wershe, Jr. who allegedly ran a vicious, sophisticated underground cocaine operation throughout inner-city Detroit. Arrested as a teen and sentenced to life without parole, Wershe remains imprisoned 30 years later and is the subject of the 2018 Sony feature film White Boy Rick starring Matthew McConaughey. Directed by Shawn Rech, the documentary White Boy follows filmmakers as they investigate the subject of 1980’s crime folklore – interviewing journalists, police, FBI agents and hit men – to set the record straight on the urban legend known as “White Boy Rick.”

The feature documentary Sex Fashion and Disco about Antonio Lopez (1943-1987), the most influential fashion illustrator of 1970s Paris and New York, and his colorful and sometimes outrageous milieu. A native of Puerto Rico and raised in The Bronx, Antonio was a seductive arbiter of style and glamour who, beginning in the 1960s, brought elements of the urban street and ethnicity to bear on a postwar fashion world desperate for change and diversity. Counted among Antonio’s discoveries– muses of the period–were unusual beauties such as Cathee Dahmen, Grace Jones, Pat Cleveland, Tina Chow, Jessica Lange, Jerry Hall and Warhol Superstars Donna Jordan, Jane Forth and Patti D’Arbanville among others. Jessica Lange, Karl Langerfeld, Grace Jones, Yves Saint-Laurent and more are featured in the documentary.